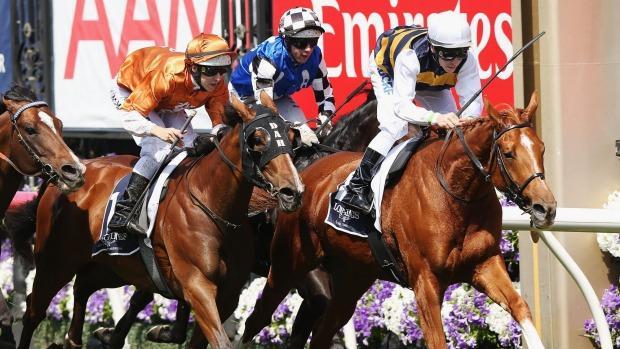 EXCITING Australian Bloodstock five-year-old Magic Artist could be set for one of the world’s richest races after another impressive Melbourne Cup carnival run.

Magic Artist ran a second eye-catching fourth along the rails when he stormed home over 1600 metres in the group1 Emirate Stakes on Saturday at Flemington.

The Irish stallion was held up for a run before flashing home for fourth in the group1 Mackinnon Stakes over 2000m on debut in Australia a week earlier.

Magic Artist was to join Kris Lees’ stables in Newcastle after the spring carnival but connections are now hopeful of gaining an invitation to the $2.4million-to-the-winner International Cup (2000m) in Hong Kong next month.

Lovett said Wohler had also floated the idea of targeting the $US5million Dubai Turf (1800m) in March with Magic Artist. Lovett hoped to learn on Sunday night whether Magic Artist had gained a start in Hong Kong.

If the horse did not get an invitation, Lovett said he would likely go to Lees’ stables to prepare for a Sydney autumn campaign.

‘‘He went terrific again, we’re thrilled with the horse and very keen to go to Hong Kong,’’ Lovett said. ‘‘To run like that after coming back from 2000metres the week before, we’re very excited by the horse.