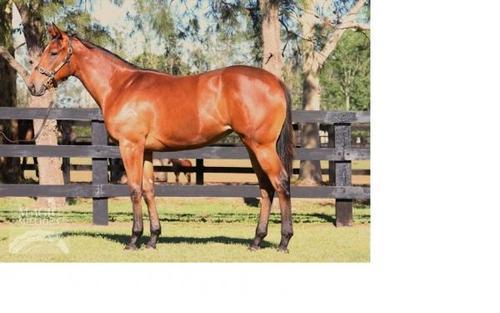 ~~This filly has everything going for her.She is out of the champion 2yr old filly

Danehill Smile was undefeated as a two year old . After running well in her trial easily she went on to beat Magic Millions winner MIMI LEBROCK on debut but by a easy 2 lengths. She then went on to beat the boys in the Listed Canonbury and then won her next race by a easy 5 lengths. She was one of the shortest priced favourites in history for the Golden Slipper before going amiss.

Our filly physically already looks a two year old.She is big and mature and how many times do you see the strongest and most developed horse win these early two year olds races. Despite her size we are very confident she will be lining up in the first 2yr old races of the year. Having the size and a great pedigree she will have residual after she finishes racing.Her pedigree is just 2yr old ,2yr old 2yr old all through it
Her half sister started $5/1 in her only start in November in a listed race and was 4th adding some further black type. The first foal from the mare won her first start in town
Being a BOBS BONUS filly we only need to win 1 race and we should be “out”
PDS has been lodged and awaiting approval.
Share price is indictaive