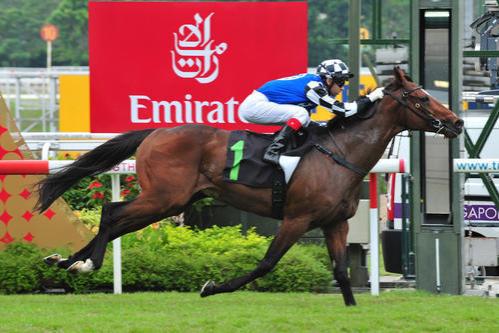 Trainer Kris Lees is looking forward to Singapore’s leading jockey Joao Moreira weaving his magic for him at the forthcoming Newcastle spring carnival on September 18 and 19.

Australian Bloodstock is bringing Moreira here to principally ride their horses, the Lees-trained Salon Soldier and Sharnee Rose, at Broadmeadow.

And he will be available for mounts in other races, with Lees also likely to use him on a couple of his other carnival runners.

because of his outstanding strike rate.

He is rightfully acknowledged as one of the world’s best jockeys, a fact which was underlined when he beat an outstanding line-up from many parts of the world in the International Jockeys’ Challenge at Happy Valley (Hong Kong) last December.

Australian Bloodstock has a number of horses racing in Singapore – including Doomben Cup winner Mawingo – and has forged a successful association with Moreira.

“It’s a wonderful move by Australian Bloodstock to bring such a world-class jockey here for the carnival,” Lees said today.

“Moreira will definitely ride Salon Soldier and Sharnee Rose for us, and I’ll look at giving him some other rides also once I have finalised my carnival representatives.”

Salon Soldier makes his Australian debut in the Cameron. He hasn’t raced since May 12 when sixth of eight in a Group 2 event over 2212m at Baden Baden (Germany).

That race has produced an outstanding form line, with winner Novellist subsequently capturing Group 1 features in France, England and Germany.

Salon Soldier was ridden by Hugh Bowman when he galloped between races at last Thursday’s Broadmeadow meeting.