Mawingo Flies Under The Radar 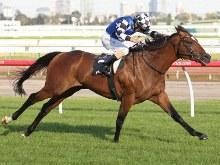 A trio of factors have Anthony Freedman confident Mawingo will run an improved race in tomorrow’s $500,000 Group 1 Doomben Cup in Brisbane.

The German import will be lining up for only his third start in Australia when he takes on Peter Moody’s weight-for-age revelation Manighar in the 2000-metre Group 1.

The Rye trainer said Mawingo didn’t appreciate the heavy track when third in the Group 2 Hollindale Cup (1800m) at the Gold Coast, which followed an impressive Flemington win, and a return to firmer conditions on a bigger track would assist.

“He’s trained on all right, he’s probably a little bit fitter for that run and he goes in in pretty good order,” Freedman said.

“He’ll be better for another run in Australia but the big thing is we need firmer ground.

“It (Gold Coast) is a very tight track and it’s probably not cambered particularly well, so I think his run was OK given all of that. He’ll probably appreciate Doomben being a little bit bigger and firmer ground hopefully.”

Nash Rawiller will have his first ride on Mawingo in the Doomben Cup, replacing Daniel Moor, and Freedman is hopeful the four-year-old entire will take up a prominent position from the gun draw of five in the 13-horse event.

“I think traditionally this race is dominated up front and he probably won’t be too far away,” Freedman said.

Mawingo is a $7.50 chance with TAB Sportsbet, which has Manighar the ruling $2.40 favourite with the two that beat Mawingo home at the Gold Coast – Shez Sinsational ($5) and Lights Of Heaven ($6) – the others prominent in betting.