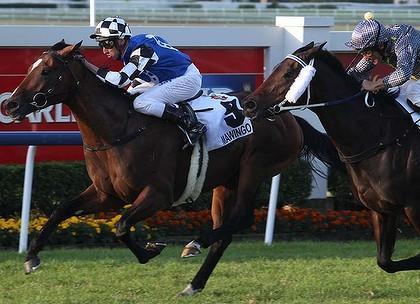 GERMAN bred and earlier performed, Mawingo, winner of the 2012 renewal of Brisbane’s historic Doomben Cup, one run at the exact 2000m for the first time in over half a century, is a representative of one of America’s greatest families.

It is one established in the1930s with the importation from France of La Troienne. A non winner and earner of only about $150 back home, she was a Marcel Boussac bred daughter of a great breed-shaper of mid last century,Teddy.
Himself sold as an untried 2-year-old for about $400, but a leading classic performer,Teddy stood in France until he was eighteen, an age at which he followed his daughter La Troienne to America.
Through her breeding career, La Troienne produced fourteen foals,12 runners and ten winners.They included the Group1 winners Black Helen, Big Hurry, Bimlech and Bee Ann Mac and also Besieged, a mare who in America went to one of Australia’s greatest ever bred racehorses, Bernborough, and produced the good sprinter and sire Hook Money.
Her daughters, between them, are ancestresses of hundreds of good horses, including the notables Buckpasser, Allez France, Affectionately, Personality,The Axe, Straight Deal, Numbered Account, Private Account and American bred Australian shuttled More Than Ready and his maternal grandsire Woodman.
A visitor to Vinery in the Scone district who doubles up La Troienne maternally, More Than Ready shares the Vinery complex in the southern hemisphere seasons with another visiting representative of the family, the A. P. Indy good class miler Congrats.
Put over 140 mares on his first visit last year, Congrats has close relationship paternally and maternally to Mackie, the dual Group 3 winner and Group1 third second dam of Doomben Cup winning Mawingo, himself a product of Montfleur, a non-earning half-sister by Sadler’s Wells to stakes winners Mr Mellon (by Red Ransom) and Seeking the Best (Seeking the Gold) and stakes placed Danebury Hill (Danehill) and Beaucette (Mr. Prospector).
Dam of two stakes winners and two others stakes placed, Makie is half-sister by A.P. Indy’s half-brother Summer Squall to four major stakes performers, including Kentucky Derby winner Sea Hero and Group 2 and 3 winner Wild Applause, grandam of Congrats.
Growing Tribute, the Ireland bred third dam of Congrats and Mawingo, and also grandam of Mozart, an Ireland bred champion sprinter by Danehill, was by the good Ribot sire Graustark and from Admiring, a stakes winning sister by Hail to Reason to world champion racemare Allez France and to American Horse of the Year Personality.Their dam, Searching, was out of one of La Troienne’s best race fillies and broodmares, Big Hurry.
Now raced three times in Australia for a win at Flemington on April 14, a third in the Group 2 Hollindale at the Gold Coast on May 5 and then the Doomben Cup success, the bay 4-year-old stallion Mawingo had shown good promise earlier in seven outings in Europe. He won twice, including the Group 3 Bavarian Classic (2000m), and finished fourth of 18 in the German Derby.
He is the first Group1 winner for the Germany based American bred Tertullian, a1995 foaled son of prominent Mr. Prospector sire Miswaki and Turbaine, a mare who is a half-sister by the Sharpen Up Prix de l’Arc de Triomphe winner Trempolino to the great European horses Galileo and Sea the Stars.
A three-quarter brother to the dam of Galileo and Sea the Stars, the Miswaki Arc de Triomphe winner Urban Sea, Tertullian was a tough performer up to 1600m, winning 12 races, five each Group 3 and Listed, from appearances in France, Italy and Germany.
Tertullian’s maternal grandsire Trempolino is also sire of Valixir (IRE), a leading European miler and French Derby placegetter who is emerging as another good sire at Fred Peisah’s Lomar Park stud at Werombi near Sydney. Earlier this month he supplied three first crop 3-year-old winners and his Perth stakes winning son Lethal Jones was unplaced, but finishing strongly when he contested the South Australian Derby.
Now a strong fancy for the Caulfield Cup in October, Mawingo is the second recent Group1 winner for the Luke Murrell and Jamie Lovett headed Newcastle region located enterprising Australian Bloodstock Company.
The other is the Redoute’s Choice colt Master of Design, the winner of the million dollar T.J. Smith Stakes at Randwick. He is now in the powerhouse team of sires at Adam Sangster’s Swettenham stud at Nagambie in Victoria.
Mawingo is one of two horses chosen in Germany by Australian Bloodstock who could give them big time Cup success in Melbourne in the spring. The other is last year’s Melbourne Cup third Lucas Cranach.
m