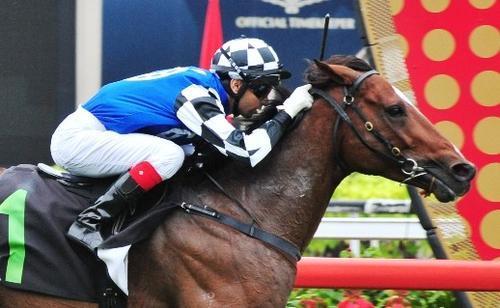 Lining-up for his first outing since finishing third behind Military Attack in the International Group 1 Singapore Airlines International Cup over 2000m on May 19, Mawingo made light work of his opposition in scoring a comfortable win.

Sent out the odds-on $9 favourite, Mawingo, ridden by Joao Moreira, scored by a length-and-a-half from Keep Away (Alan Munro) with Martincho Cat (Barend Vorster) a nose away in third place.

Moreira had Mawingo racing in fifth place on settling down behind the pace set by Keep Away and Shuttle Man (A’Isisuhairi Kasim).

He was content to bide his time before easing three wide just prior to straightening. Once balanced up for the run home Moreira asked the entire to lengthen his stride and he joined the fray with 200m to run before showing his superiority in the final stages.

Formerly prepared in Australia by Anthony Freedman for the Australian Bloodstock Stable, Mawingo came to Singapore to run in the SIA Cup under the care of Michael Freedman.

Following his third placing in that race, Mawingo then had to do two weeks quarantine off-site before returning to Freedman’s stable around six weeks ago.

“He’s done a pretty good job,” said Freedman. “He raced at Rosehill in April, came up here to run in the SIA Cup then had to go off-site and do his quarantine to come back in here as a local horse.

“I think this win will also do his confidence the world of good. It’s been something like 14 months since his last win and sometimes with these older horses they can lose their way a bit.

“But on that win today he looks like a great pick-up for the stable. He looked a little ring-rusty and he’s going to get a lot of benefit from the run as he hadn’t raced for a while.

“There’s then some nice races later in the year for him and what I liked today was the way he settled in the race.”

Freedman has earmarked races like the Group 1 Kranji Mile and the Group 1 Raffles Cup in October as suitable races and was not ruling out Singapore’s richest domestic race, the Group 1 Longines Singapore Gold Cup over 2200m on November 17 with the entire.

“The way he settled in the run and the way he finished the race I think the Gold Cup could also suit him,” said Freedman.

Moreira said Mawingo had showed his class despite carrying the equal topweight of 57kg on Sunday.

“Even though he was first-up after his third in the SIA Cup he did have the class on his opposition,” said Moreira.

“I knew he would make it tough for the other horses even though he was giving them weight. He gave me a great ride throughout the race and I was always confident that he would win the race.”

Mawingo is a German-bred five-year-old by Tertullian from Montfleur and has won five of his 20 career starts and just over S$1.2 million in prizemoney.