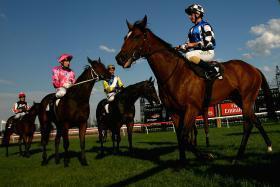 MELBOURNE – Qualifying German import Mawingo for the Caulfield and Melbourne cups is a priority after his stunning Australian debut at Flemington.

“I am mindful of getting him qualified and would like to do that this prep if we can,” Freedman said.

The four-year-old arrived in Australia 10 weeks ago after winning two of his seven starts in Germany and Italy.

Australian Bloodstock bought Mawingo specifically for the cups with a group of other owners, and he races in the same colours as Lucas Cranach, who finished third for them in last year’s Melbourne Cup.

Freedman said he was still learning about the entire and was impressed with how well he finished off to win yesterday’s Muscular Dystrophy Australia Plate (1600m) after being midfield and wide throughout the event.

“I was really pleased with his tactical speed,” Freedman said. “Obviously he can race anywhere in a field, and that’s going to augur well for the future.

“He really wasn’t closer than three-deep, so it is pretty good effort to front up here after getting off the plane 10 weeks ago.”

“On the back of Lucas Cranach, German form is now accepted and form around this horse is particularly strong since they bought him,” Freedman said.

“He’s got great acceleration and that is what you need these days to win big staying races.”

Mawingo scored by two lengths from Eraset and Booklet, who was ridden by comeback jockey Darren Gauci.