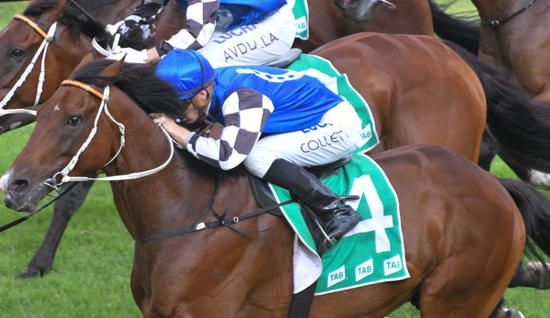 Kerrin McEvoy knows a lot about the horse he has to beat in Saturday’s Tancred Stakes but is happy to be sticking with Red Cardinal as he steps to the extended trip of 2400m at Rosehill.

McEvoy was on board favourite Avilius when he won the Ranvet Stakes on Golden Slipper day last weekend but had already been booked for Red Cardinal in the Tancred when Godolphin decided to back up its imported stayer, which is the $1.70 favourite.

“It is one of those things, I didn’t think they would back him up and Red Cardinal has done nothing wrong this preparation,” McEvoy said. “Avilius showed last week he likes that soft ground and he is denfitely the one to beat if he backs up well.

“But you can’t get better form than Red Cardinal going into the race at a trip that should suit him and we should get the soft ground that he wants.”

Red Cardinal had not won in a couple of years before he stormed home in the Parramatta Cup at the start of his first preparation for Kris Lees, before being too strong in the Sky High Stakes over 2000m on a heavy Rosehill track last time.

“He has enjoyed getting his toe in, which is what he has always wanted since he has been here. The wet tracks slows the others down and it doesn’t slow him down,” McEvoy said. “It is not jarring on his body like the hard tracks. He is a horse with a few niggles and he doesn’t feel them on soft ground. He has really let go well on those surfaces, which is the key to him really.”

“Avilius demonstrated that he was back at full fitness when he scored his most convincing win yet in the Ranvet Stakes,” he said. “With an unbeaten Sydney record at stake and with the best weight-for-age credentials of any runner, he appears to be perfectly placed for the quick back-up.”

It is a big day for Godolphin with Pohutukawa also looking for group 1 success in the Vinery Stakes with McEvoy in the saddle.

The Medaglia D’Oro filly had been considered the unlucky runner when charging to the line late in the Light Fingers and Surround Stakes where she was third and fifth respectively before she scored a resounding win in the Kembla Grange Classic.

“She beat the second grade fillies at Kembla but did it really well. She gets up to 2000m, which is a trip she looking for. If we can get the right run she is going to be really strong late,” McEvoy said.