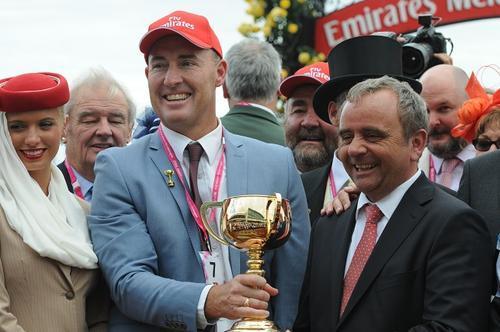 ~~Protectionist has become the first German horse to win the Melbourne Cup, taking out the $6.2 million big race on Cup day at Flemington.

Trained by Andreas Wohler, Protectionist had come into calculations after its win in the Group Two Prix Kergorlay at Deauville earlier this year, followed by an eye-catching fourth in the Herbert Power Stakes at Caulfield after landing on Australian soil.

The win completed an overseas dominance of the big three feature races of the Spring Carnival in Melbourne, after Japanese horse Admire Rakti won the Caulfield Cup and Irish horse Adelaide took out the Cox Plate.

In a tragic end to the race, Cup favourite Admire Rakti collapsed on its return to the stalls and died after finishing last in the race and hours later seventh-placed Araldo was put down after breaking a leg.

“Our vets are obviously on hand and the horse will undergo an autopsy and obviously we will have to await those results to find out the cause of the death,” the chairman of stewards, Terry Bailey, told the Seven Network after the death of Admire Rakti.

“Straightaway, on its performance, normal procedure here is especially for the favourite to be vetted anyway, so we were certainly on to it and unfortunately just the process going back to the stalls to get hosed down and go to the swab box, the horse passed away.”

The Mike Moroney-trained Araldo took fright on the way back to the mounting yard, jumping a steel rail and getting its leg caught in a barrier.

Araldo was rushed to Werribee Veterinary Hospital but experts determined the injuries were too severe to recover from.

The deaths of Admire Rakti and Araldo follow the death of Verema, who broke the cannon bone in her near foreleg during the 2013 Melbourne Cup and was put down.

Red Cadeaux then took the lead with 300m to go, as bottom-weight Signoff came in pursuit, but Protectionist then burst through in the late stages and had too much speed for its rivals, winning by four lengths.

Red Cadeaux finished runner-up for a third time in four starts in the Melbourne Cup, with Who Shot Thebarman a half-length back in third.

“(It was a) strong pace. He was able to sort of follow Mutual Regard. And, you know, he has thrown him in.

“Obviously (winning the Cup), it’s very special. You have to share it with the kids. Because being away a lot. I need to win these races to make it worthwhile.”

Wohler told the Seven Network the win was “the biggest of all.”

“The pace was suicidal off the front. He stayed. And he has a nice turn of foot once he throws down the power,” he said.

“It was a smooth run. The jockey was so patient with him. And found the right gap and then through.”

Wohler said the choice of the Herbert Power as a lead-up rather than the Caulfield Cup had worked in the horse’s favour.

“The (VRC) chairman couldn’t understand it because he ran there for $200,000 and another week later for the $3 million Caulfield Cup we didn’t (run). Now he knows why. He does now.”