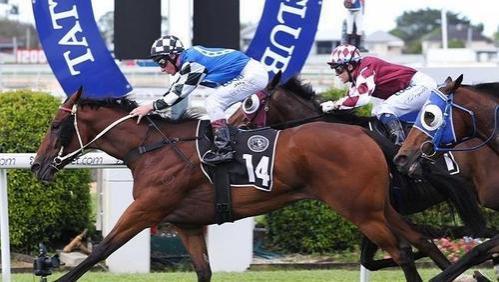 JIM Byrne shook off what had been a “messy” day to produce a perfect ride on Newcastle raider Brook Road to land the Travel Associates Classic at Doomben yesterday.

Sporting the familiar Australian Bloodstock colours worn by Melbourne Cup winner Protectionist, Brook Road enjoyed the perfect trail and Byrne was able to seize an inside run halfway up the straight. The Kris Lees-trained mare was good enough to accelerate into it and stave off a wall of late challengers.

Byrne was adamant the ride should have completed a winning treble after unlucky earlier defeats on Beatniks (second) and Casual Choice (third).

“It’s been a messy day,” he said. “Beatniks was unlucky and there’s no doubt Casual Choice should have won. ”

That aside, Byrne was full of praise for Brook Road, who was formerly in the care of Bart and James Cummings before being purchased by Australian Bloodstock.

“She’s been desperately unlucky this time and I was very confident today,” Byrne said.

“She takes a little while to pick up but then she accelerates very strongly and sprints strong at the end.”

As good as Brook Road was, the eye-catcher was Queensland Oaks heroine Tinto, who charged late along the rails to grab second.

“That run was just exceptional. If it was across the road at Eagle Farm she bolts in,” trainer Rex Lipp said.

“It didn’t surprise me that she ran well, but she’s still big and fat, so she’s going to take enormous improvement from that.”