Moreiera In Demand At Newcastle 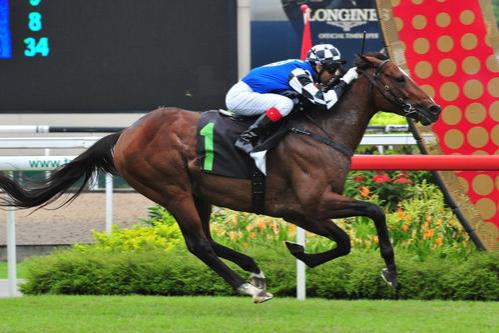 Monday, 16 September 2013: Singapore sensation Joao Moreira will be riding in 13 races over the two days of this week’s Newcastle Cup carnival after being rushed with offers by leading trainers.

The record-breaking Brazilian has been booked for seven races on Wednesday and at least six on Thursday for a host of Broadmeadow and Sydney trainers.

Trainers queued to book Moreira after local syndicators Australian Bloodstock sought him to ride their horses at the carnival.

The brilliant jockey, who has just agreed to take up a riding contract in Hong Kong, did his bit to stir publicity for his visit by landing a remarkable eight winners from eight rides at a Kranji meeting last week.

Moreira made an instant impact on his first appearances in Australia in the 2011-12 season when he made several trips from Singapore to ride for Nathan Tinkler’s Patinack Farm stable at feature meetings.

He won six races during those visits including the G2 Hill Stakes and G2 Chelmsford Stakes on Trusting, G3 Frederick Clissold Stakes on No Evidence Needed and Listed Gimcrack Stakes on Hussousa, all trained by John Thompson.

Pirate Bay is trained at Broadmeadow by Kris Lees while Pretty Pins comes from the John Thompson stable at Randwick.

Moriera was to ride another Lees-trained Australian Bloodstock import Super Salon in the Cameron but was switched to stablemate Pirate Bay when it was decided to delay his Australian debut.

His other major rides over the two days are the Lees-trained mare Sharnee Rose for Australian Bloodstock in the $125,000 Tibbie Stakes on Thursday and Hooked , a Thompson-trained three-year-old in Wednesday’s $150,000 Spring Stakes.

Lees had first call on Moreira and has booked him for a total of seven rides over the two days. His other mounts have come from John Thompson, Steve Hodge, Grahame Begg and Peter Eggleston.

Moreira forged a relationship with Australian Bloodstock principals Jamie Lovett and Luke Murrell when he rode Mawingo to success for them in Singapore.

“As it has turned out we are lucky to get Joao to come to Newcastle now that he is going to Hong Kong,” said Lovett.

“He said his main priority right now was to ride plenty of winners at Newcastle. He will be a great drawcard for the carnival.”

Moreira has ridden almost 600 winners since he began riding in Singapore in 2008 and has been tagged the ‘Magic Man’ after dominating the premiership with record results over the last three seasons.

He will join the Hong Kong jockey roster on a permanent basis on October 27.