NOW ON HIS OWN RACING “AVENUE” 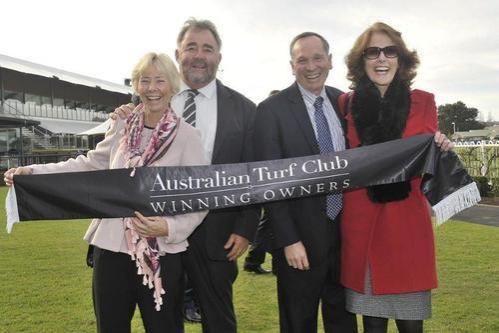 CLAUDE Renshaw is from a family steeped in racing tradition.

His father (also Claude) raced the brilliant and versatile Group 1 performer Shaftesbury Avenue (trained by the late Bart Cummings), who won no less than six Group 1 races in the early 1990s.

Now, he is enjoying his own racing ride – thanks to his involvement with leading syndicators Australian Bloodstock.

With an interest in “about 25 horses”, Renshaw part-owns promising stayer Big Duke, placed in the 3200m Group 1 Sydney Cup at Randwick on April 22 and a definite contender for Melbourne Cup honours at Flemington in November.

He also recently celebrated an international success with former English filly Delectation, who won a Group 3 race at Cologne last month on debut for Germany’s Andreas Wohler, the training wizard who won the 2014 Melbourne Cup with Protectionist.

Delectation, now unbeaten from three starts, is heading for the French Guineas at Deauville on May 14 – and if she performs well, a return trip to England is in the offing for the Coronation Stakes at Royal Ascot on June 17.

Renshaw, who grew up at Binnaway in central western New South Wales before later moving to Sydney, is currently in charge of developing a Wagyu cattle operation in Queensland.

And whilst he isn’t getting to see as many of his horses race as he would like, he is certainly keeping up to date with their progress.

“Big Duke has given us some terrific thrills with his performances since coming to Australia, and he ran really well in the Sydney Cup,” Renshaw said.

“It would be great if he can make further progress and get a Melbourne Cup start later in the year.

“Winning a black type race overseas (with Delectation) is something I could never have imagined, and I have the greatest admiration and respect for the Australian Bloodstock guys.

“They are amazing how successful they have been at picking a horse with talent overseas, and bringing them to Australia and winning races. Their strike rate is so good.

“Big Duke is a prime example. He had won one race in England (at Wetherby) when Australian Bloodstock bought him, and he has since won the Launceston Cup and Manion Cup and Chairman’s Handicap in Sydney for us.”

Renshaw is close friends with fellow Australian Bloodstock supporter John Hunter, who hails from Mendooran, not far from Binnaway.

“John and myself have raced horses in the bush, including Mr Frisco, who ran twice at the famous two-day Birdsville carnival in 2006,” Renshaw said.

“He ran second on the first day (Friday), then backed up the next day at the Cup meeting and won.”

In fact, both Renshaw and Hunter’s first involvement with Australian Bloodstock was with Dealers (sold by Darley, now Godolphin), who won his first two starts for his new owners in Brisbane in January, 2010.

“We still breed the odd horse or two, but nowadays it is mainly all about the horses we race with Australian Bloodstock, and we’re enjoying it,” Renshaw said.

He well recalls his father’s horse Shaftesbury Avenue, who had nearly a 50 per cent winning record (13 from 28 starts).

“Dad bought a mare (Lady Upstage) from England, and bred Shaftesbury Avenue from her (by Salieri),” he said.

“He was a fantastic horse, winning five Group 1s in one season.”

They were the 1990 George Main Stakes and 1991 All Aged Stakes at Randwick, 1990 Honda (now Cantala) Stakes, and 1991 Lightning Stakes and Newmarket Handicap double (the latter three at Flemington).

He had a great rivalry with Super Impose, and was placed behind him in both the 1990 and 1991 Doncaster Miles at Randwick.

But he did relegate “Super” into second placing in the 1990 George Main, 1991 All Aged Stakes and Caulfield Stakes and 1992 Group 2 Warwick Stakes at Warwick Farm; Shaftesbury Avenue’s final success of his outstanding career.