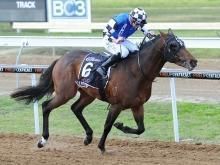 The son of More Than Ready overcame a chequered passage in the straight to score a meritorious win in the 1000-metre event.

Although only moderate to begin, he settled well midfield but was caught behind a wall of horses for the first half of the straight, requiring Moor to duck back to the fence in search of a run at the 200m. He responded with an impressive finish that carried him to a one-length win.

Oceanus, like Alinghi, who was by Encosta de Lago, is out of star broodmare Oceanfast.

Alinghi was the first foal out of Oceanfast and won four times at Group 1 level, including the Blue Diamond Stakes and Newmarket Handicap when trained by Lee Freedman.

She also won the Group 1 Thousand Guineas (1600m) and Oceanus, who is prepared by Freedman’s brother Anthony, is among the entries for the this year’s male equivalent – the $1 million BECK Caulfield Guineas (1600m).