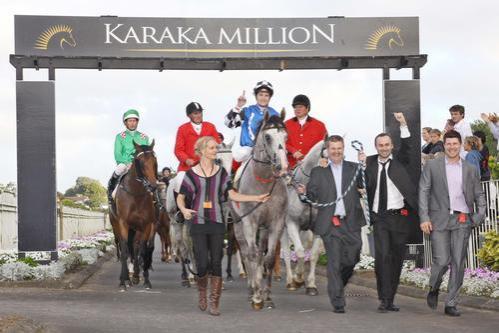 AUSTRALIAN Bloodstock, a Newcastle region based enterprise which has become a significant player in Australian racing, got some solace for narrowly missing out on glory in last year’s Melbourne Cup, a race in which their imported German entry Lucas Cranach finished third, when their part owned colt Ockham’s Razor was successful in the Listed Karaka Million at Ellerslie in New Zealand last Sunday, January 29.

It is a 1200m event for juveniles who graduated from New Zealand yearling sales, and one in which the million dollars prize money, like the Magic sales races in Australia, includes distribution to every runner.The winner’s purse was $550,500.

Sold at the sales for $170,000 by the Rich Hill stud, the colt which was become Ockham’s Razor was having only his second start when he won the Million as a short priced favourite. Raced by nine owners, including Australian Bloodstock, and in the hands of Anthony Freeman, also preparer of Lucas Cranach, at the family’s training complex on Victoria’s Mornington Peninsula, he had earned the trip back across the Tasman with a second at Caulfield on January 2.
Up against progeny in the14 runner event sired in Australia by General Nediym (two), Choisir, Dr Green, Starcraft, Shaft and Nothing To Lose, but sold in New Zealand, Ockham’s Razor was got and foaled in New Zealand. He is in the first crop of one of their most promising sires, the Rich Hill based Any Suggestion, now the source of three winners.

A powerhouse grey standing 16.2 hands, Any Suggestion is another product of Queensland breeding. He is by the Danehill sire Lion Hunter, a big loss when he died at Neville Stewart’s Oaklands stud,Toowoomba at only twelve, and from Advisable, a smart Brisbane winner and a sister by the Man o’War male line sire Regal Advice to Miss Sandman. She was a tough sprinter who has won acclaim as the dam of Any Suggestion’s cousin, the national racing star and current Queensland champion sire Show a Heart, a representative of the Star Kingdom line.
Any Suggestion, Show a Heart, Advisable and Miss Sandman were all bred and raced by R.A. Cutts (Showtime Breeding Pty Ltd) of Queensland. He won nine races, all 1200m or shorter, with Any Suggestion, including the Listed Chief de Beers at Doomben and the Ballina 2YO Bracelet, finished second to Miss Andretti in the Group1 William Reid at Moonee Valley and fourth in the Group1 VRC Lightning Stakes.