Oliver Sees A Masterpiece In The Making 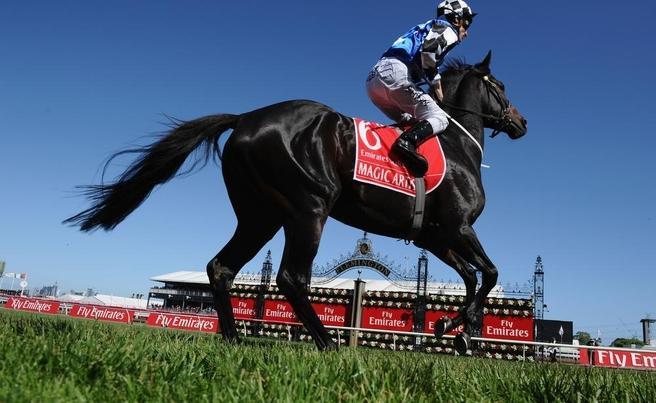 Champion jockey Damien Oliver has picked up the plum ride on Magic Artist in the $1 million Kingston Town Classic (1800m) at Ascot on Saturday week.

Oliver is keen to claim his second win in the Group 1 feature.

Magic Artist firmed to outright favouritism at $4.20 with the TAB yesterday.

Oliver, who won the Kingston Town on Sniper’s Bullet in 2009, jumps off top mare Real Love to ride Magic Artist.

He was on Real Love when she ran seventh to Good Project in the Railway Stakes (1600m) on Saturday.

“He didn’t have a lot of luck in Melbourne this spring.

“If he brings that form over he’ll be hard to beat.”

Magic Artist arrived in Perth last Sunday week after missing out on an invitation for the Hong Kong Cup next month.

German trainer Andreas Wohler held the four-year-old out of the Railway because he preferred to give Magic Artist a month between runs.

The import was outstanding in his two runs at Flemington, finishing strongly for fourth in the Mackinnon Stakes (2000m) and again fourth in the Emirates Stakes (1600m).

“Everything’s gone to plan,” Lovett said. “He’s settled in well. He’s done some travelling, but he seems to handle it.

“He was competitive at the mile in the Emirates, so the nine furlongs will suit him.”

The Kingston Town is expected to be the race of the Ascot summer carnival, with the likes of dual Group 1 winner Delicacy, unbeaten filly Perfect Reflection, Real Love, Black Heart Bart and WA Guineas winner Man Booker also in contention.

One of the big names that will be missing is Railway Stakes winner Good Project. The Chris Waller stable opted against paying the $22,000 late entry fee for Good Project, who was due to fly out of WA last night.