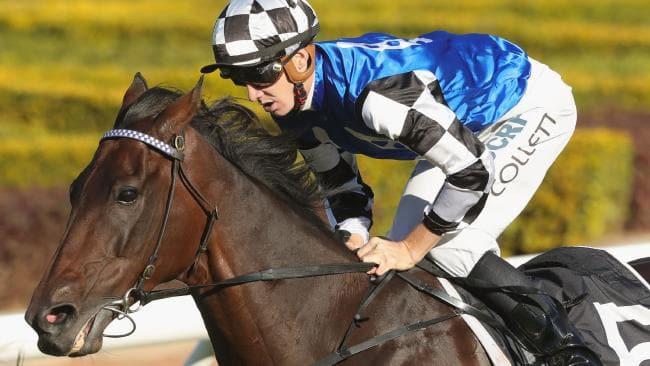 “He was first-up over 1400m where I wanted to run him over further but he was strong through the line that day. I didn’t want him three-deep, being his second-up run over 2000m, and he was three-deep for half the race.

“When he got across I thought ‘oh well, he’s done a bit of work’ and it ended up being a strong win.”

Our Century got to the lead at the 300m and Collett rode him confidently to the line as he powered away from the field. He will next run in the McKell Cup (2400m) in three weeks at Randwick before heading north.

Collett said it was a tough win, but after he overcame the wide run and put the field away the hoop was kind on him to the line.

“He was very quick away, but we couldn’t slot in,” Collett said. “He was able to get outside the lead and to do it all while still on the bridle made me quite confident when I got to the leader and saw Ecuador under pressure.

“I just think he was the superior stayer. Gee, he looked good in the yard and it gave me confidence going to the barriers. It was soft on the line and soft going around the home turn. Even when I went for him it was very easy.”

Adam Hyeronimus said Ecuador produced his usual “super performance” but the big weights are making it hard for him to secure wins.

“He is very tough. He bowled a long at a nice tempo. I wanted to pick up at the 700m and try and catch them off the bridle knowing he can sustain a run,” Hyeronimus said. “The winner was ready for it outside me but to fight on and just get beat a length, he has done a super job.’’

Brenton Avdulla rode another of the race’s fancies, Nettoyer and she, once again, had to come from the back of the field but couldn’t pick up the winner when he sprinted.

“I thought she had every chance, to be honest,” Avdulla said. “She gave me the perfect ride and jumped into the bridle and put herself into the race but she just wasn’t good enough. Softer ground would probably help her.”

Alward firmed in late and was sent out a $2.80 favourite and didn’t have the easier run in transit but should have put up a better fight than what he did when beaten at the 300m to finish seventh.

“We were probably a pair close early but from the gate we wanted to be closer and that’s the only spot we had,” jockey Tye Angland said.