Our Century still young at heart 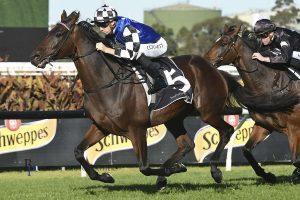 OUR Century is a racing oddity — an eight-year-old gelding classed as a veteran but with his best racing days still ahead of him.

That is the belief of trainer Kim Waugh and with good reason as Our Century is having only his 17th start in the Listed ATC Cup (2000m) at Rosehill Gardens on Saturday.

“For a stayer, he is so lightly raced, he has done nothing when compared to our racing,’’ Waugh said. “He’s very sound, he’s a son of Montjeu and the breed get better as they get older — and he is a seven-year-old by northern hemisphere time.

“He’s a pleasure to train, he’s such a beautiful horse.

“I worked him on the course proper (Thursday morning) at Wyong and I watched him as he was coming off the track; he was prancing around, feeling good and enjoying himself. He’s thriving in his work.’’

Waugh’s enthusiasm indicates Our Century is going to be very hard to beat again in the feature staying race.

Our Century resumed with a tough effort to hold off Abdon to win the November Topaz (1900m) at Rosehill two weeks ago.

The stayer’s effort to beat some race-hardened opponents was full of merit and Waugh’s training feat to have the gelding in winning form first-up earned deserved praise.

“His win didn’t surprise me,’’ Waugh said. “I was quietly confident going into the race but I don’t like to be too cocky. I knew how well he was going and he was ready, he had the work under his ‘belt’.’’

In early TAB Fixed Odds betting, the Chris Waller-trained Savacool is the $2 favourite with Our Century on the second line at $5.

Our Century has only had four starts for Waugh, winning twice at Rosehill including the Listed Lord Mayor’s Cup at his second run after a spell in May.

Waugh believes she has Our Century in a similar vein of rich form going into the ATC Cup.

“I thought he was flying last preparation and the day he won the Lord Mayor’s Cup, it was a great win,’’ Waugh said. “Then at his next start when he ran third (to Destiny’s Kiss in the McKell Cup), he raced a bit flat and we found out afterwards he had contracted a virus.

“But he has come back in great order and is every bit as well now as he was going into the Lord Mayor’s Cup.’’