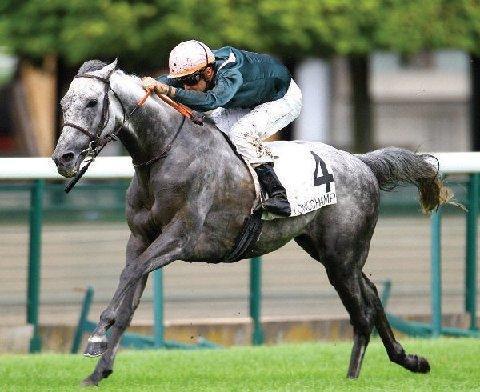 Australian Bloodstock have added a classy French stayer to their spring arsenal in the shape of Terrubi (IRE), a four-year-old entire by Dalakhani that will be prepared in Sydney by this year’s successful Australian Derby trainer David Payne.

The lightly-raced and well-performed grey comes to Australia with a huge recommendation from one of the world’s top jockeys, Belgian-born Christophe Soumillon.

Australian Bloodstock’s acquisition of Terrubi comes hot on the heels of their purchase of German stayer Singing (Fr), who will be prepared for the Caulfield Cup (2400m) in October by Newcastle’s Kris Lees.

Terrubi has not been out of a place in nine starts so far – including a decisive victory over one of England’s best stayers Brown Panther (eighth to Fiorente in last year’s 3200m Melbourne Cup) in a Group II feature over 2800m at Longchamp last Sunday.

Terrubi and Brown Panther made their runs together in the Prix Maurice de Nieuil, but the Australian Bloodstock purchase clearly proved the superior stayer and was eased down at the finish by his rider.

“Christophe was very bullish about this horse before the race, and it was good to see him win with such authority ” Australian Bloodstock director Jamie Lovett said today.

“It’s very encouraging, especially looking ahead to the Melbourne spring.”

Fellow Australian Bloodstock director Luke Murrell said the purchases of Singing and Terrubi signified a change in direction by the company.

“Rather than seek horses which are already well exposed and paying ridiculous money, we are focusing on lightly-raced stock and qualifying them for our feature races before bringing them to Australia,” Murrell explained.

“Financially it is more viable and recent results for us in Europe would indicate this direction has merit going forward. We were able to complete the purchase of Terrubi prior to him winning the Group 2 at Longchamp last weekend and it certainly gave the owners a massive thrill as this race not only helped qualify the horse for the Cups this year but also enhanced his stallion appeal.”

Terrubi is directly related to the world’s best stallion in Galileo and Europe’s most promising young stallion in Sea the Stars to name but a few in a star studded pedigree.

He is a half-brother to stakes-winner Alpine Snow from Altruiste, an unraced half-sister to champion racemare and broodmare Urban Sea, the dam of both Galileo and Sea the Stars.

This family continues to improve with the Group I Irish Oaks last weekend won by Bracelet, a grand-daughter of Urban Sea.

Timeform certainly reacted quickly to the victory of Terrubi giving him a rating of 119 which will make him the highest rated Timeform horse to be imported to Australia as a racing prospect.