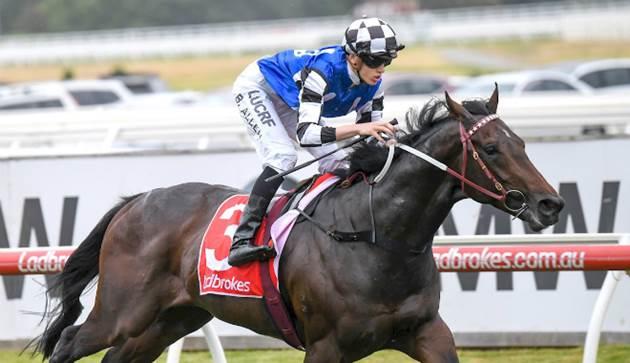 Hugely talented import Plein Ciel will look to add another picket to the fence at Caulfield on Saturday, the four-year-old gunning for four wins on the spin in Heat 7 of Swettenham Stud Summer Championships – a Benchmark 84 race over 1800m.

After two starts in Germany last year, Plein Ciel was purchased by Australian Bloodstock, a syndication group that has enjoyed great success with overseas-based horses, most notably Protectionist, winner of the 2014 Melbourne Cup.

Plein Ciel has been enormous in three starts in Australia, the Darren Weir-trained entire winning a 1300m Maiden at Warrnambool on November 17, bolting in over 1400m at Sandown on December 7 in a Benchmark 64 event, before crushing his rivals in a 1600m Benchmark 70 race at Caulfield on Boxing Day.

“He’s obviously coming through the grades, I think Saturday will tell us a lot more,” Jamie Lovett of Australian Bloodstock told G1X.com.au.

“He can’t do any more than win, but Saturday’s more of a race, it’s a fair step up in grade. I’ve got a good opinion of the Cindy Alderson’s horse (Rewarding Effort) and I think Weir’s other horse (Bondeiger) is starting to find form.

“If he can put that field away you can start lifting the bar, I guess.”

Lovett has been in the game long enough to know not to get carried away, but he is genuinely optimistic about what the future holds for Plein Ciel.

And for now, it’s one race at a time, with no autumn or spring goals in place.

“I’m still a bit guarded, to be honest – historically when you start getting excited about horses that win before Christmas it’ll bite you on the arse,” Lovett said.

“But, sectionally he’s good, I do like the times he’s running, and he’s really switching off. His last furlong is his worst – he’s putting them away and then he’s switching off, which is a good sign.

“If there’s still a bit there and he’s winning by a decent margin and running time, usually that’s a sign that you’ve got a decent horse.”

By Mamool, sire of Lucas Cranach (third in the 2011 Melbourne and winner of the 2012 Group 2 Peter Young Stakes), Plein Ciel was initially trained by Karl Demme.

“We do the German form inside out, we do every race,” Lovett explained.

“He’d done enough in those two starts to suggest he would get here (to Australia) and be Saturday grade once he got out to a mile-and-a-quarter. To be honest, I didn’t have him winning horses at 1300m and 1600m, so that’s obviously a bonus.

“He was a relatively inexpensive horse, we didn’t pay a lot of money.

“In saying that, they’re not cheap, because by the time you do the conversion from Euro to AUD, and then you’ve got your insurance, quarantine and transport. There’s no cheap horse out of Europe, but relatively speaking, when you look at what some of these guys are paying for them, I think he’s good value, he looks good value today.”