Plenty on the line for Brave Smash at Moonee Valley 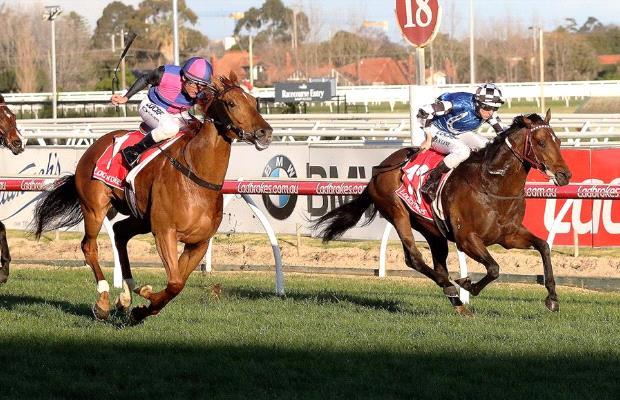 Former Japanese galloper Brave Smash is better than a four-to-one chance of taking a slot in The Everest but his hopes hang on another bold run at Moonee Valley on Saturday.

Brave Smash made a big impression on Australian punters with his effort to run second to Vega Magic at Listed level at Caulfield on August 19 before the winner franked the form with his Memsie Stakes success.

Brave Smash’s effort at his first run for trainer Darren Weir convinced the Australian Turf Club to put him on a five-horse shortlist of candidates for its Everest slot on Monday.

However, syndicator Australian Bloodstock co-founder Luke Murrell said the ATC was one of a few slot-holders looking at doing a deal to have Brave Smash run for them in the $10 million event on October 14.

“The ATC was a little bonus I suppose,” Murrell said. “Given the feedback that we’ve got from three other slot-holders, I think the chances of us getting a slot are high.

“We have probably had the opportunity to lock in a slot this week and, speaking to Weiry, he feels that it would be better to wait until after Saturday.”

But the plans could change if Brave Smash fails to live up to expectations in the Listed Strathmore Community Bendigo Bank Stakes (1200m).

“Darren knows we don’t have to make a decision and if he doesn’t win, well then he probably doesn’t deserve his place in The Everest and we’ll push on to something else,” Murrell said.

“We wanted to be fresh and peaking for The Everest and we can’t do it at both ends so we rolled the dice and went in a little bit underdone first-up and he’s still got improvement in him second-up.

“Darren says he’ll be good enough and then we can have him ready third-up.”

Damian Lane will ride Brave Smash again at Moonee Valley on Saturday while the stallion will start the $120,000 contest from barrier eight.