Princess Posh on The Market 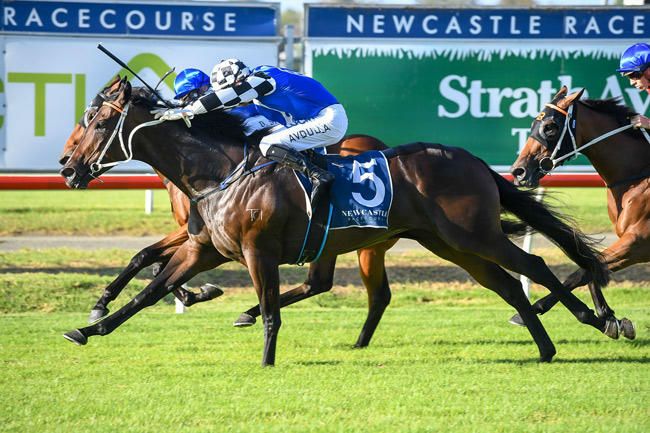 For the best part of eight months Princess Posh did not have a break longer than five weeks between starts, so the 14 weeks from her second to Cool Passion in the Group III Hong Kong Jockey Club Stakes at Flemington last November to her unplaced effort when resuming in the Group II Triscay Stakes at Randwick on February 16 was among the longest breaks in her 26-start career.

The resilient daughter of Canford Cliffs showed she had taken plenty from her first-up run by crediting her trainer Kris Lees with his first win in the Group III Newcastle Newmarket at Broadmeadow on Friday.

With Brenton Avdulla in the saddle, Princess Posh defeated Godolphin’s 4yo Street Cry (IRE) mare Savatiano by a half head with the winner’s stablemate Invincible Gem (I Am Invincible) another length back in third. (images Steve Hart )

It was the second stakes win for Princess Posh following the Group III Tibbie Stakes over the same course and distance back in September.

Carrying the colours of Australian Bloodstock, Princess Posh has been unlucky in several stakes races, placing in the Group II Golden Pendant at Rosehill and Group III Tesio Stakes at Moonee Valley in addition to her near miss in the HKJ Club Stakes.

Lees has another Newmarket in mind on Saturday and is on the road with three live chances, In Her Time, Brave Smash and Graff, in Saturday’s time-honoured Group 1 sprint down the straight at Flemington.

So, it was left to Australia Bloodstock’s Jamie Lovett to break the news that the 5yo mare had likely made her final start for her present owners.

“She is likely to go to the (broodmare) sale now.

“She has been a great horse for the owners. It’s a thrill to win this race.”

Princess Posh advances her overall record to 8 wins, 3 seconds and 7 thirds from 27 starts with earnings of $561,520.

She was a $25,000 purchase out of the Phoenix Broodmare Farm draft at the 2015 Inglis Premier Yearling Sale.

A half-sister to two winners, Princess Posh is out of the winning Viscount mare The Baroness who is a half-sister to Group III Millie Fox Stakes winner A Country Girl out of the dual Listed stakes-winner Verdict Declared.

The Baroness was not covered for four seasons after foaling Princess Posh but was served by Foxwedge in 2017 and was consigned to the 2108 Magic Millions National Broodmare Sale where she failed to make her $40,000 reserve.