Promising Debut For 2YO Correio 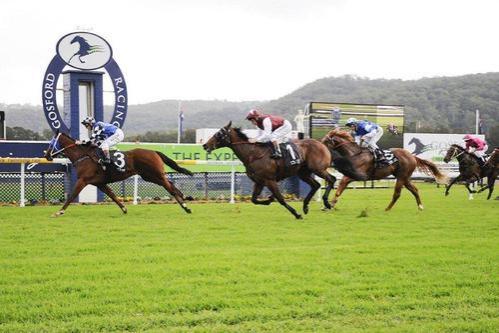 Two-year-old gelding Correio made the best possible start to its racing career when scoring a clear win in the Like Us On Facebook Maiden Plate (1100m) at Tuesday’s Australian Turf Club meeting at Gosford .

Correio was slow to leave the barriers and settled at the tail of the field in the early part of the event. Correio’s jockey Christian Reith was able to tack onto the back of the favourite Miggeru, who was also slow to leave the machines.

Turning for home, the leader Frespanol gave a kick with Miggeru’s jockey Nash Rawiller electing to make his run to the outside of his Gai Waterhouse-trained stablemate leaving the rails for Correio.

Correio sprinted quickly when he had clearing running, and although running about in the straight, he have a clear advantage at the post over the luckless Adeage, which kept finding the line after travelling three and four wide for much of the trip.

“As soon as he hit open spaces (in the straight) he doesn’t know what he’s doing,” winning jockey Christian Reith told TVN. “He’s got a lot to learn.

“He’ll come of age and the more runs he has the more mature he’ll get and the better he’ll get.”

Correio’s trainer Kris Lees reiterated Reith’s comments about his juvenile’s greenness but said the horse had shown natural ability from his early gallops.

“The boys from Australian Bloodstock found him at the New Zealand ready to runs and the first gallop we gave him he showed ability so full credit to them,” he said.

“He’s got the makings of developing into a lovely horse when he learns what it’s all about. What you saw today is his natural ability but when he learns to be a racehorse he will only improve and I think he’ll appreciate further than 1100 metres too.

Lees said he’ll “see how the horse pulls up” before deciding if to push on and try to “jag a Saturday race in town”.

“He’s a horse that will keep developing in his three-year-old season but we know he handle’s a wet track so we might try to jag a Saturday race in town if he comes through today well.”