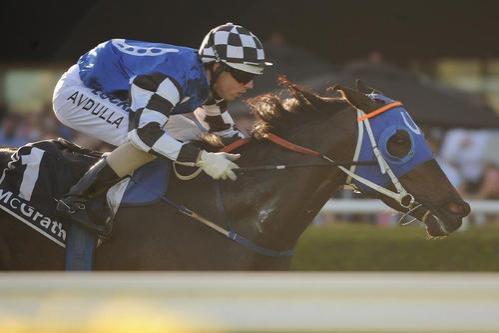 Trainer Kris Lees has opened the door to a possible start in the Group I weight-for-age MacKinnon Stakes for Salon Soldier, his impressive Randwick winner on Saturday.

The Newcastle-based trainer was optimistic about the import’s prospects in his first Australian start but even he was impressed when the son of Soldier Hollow trounced his rivals with a 2-1/2 length win in the Myer Spring Fashion Handicap (1600m).

“Everything he’d shown me going into Saturday was to suggest we had a nice horse on our hands but you’re always a little cautious until they do it on raceday,” Lees said.

“All his European form was upwards of 2000 metres so while I was expecting a good run, I was extremely pleased with how he went about things.”

Lees said it had always been his intention to head to Melbourne during the spring with Salon Soldier but the manner with which he disposed of his opposition on Saturday has him giving consideration to upping the stakes in the coming weeks.

“We’d planned to send him to Flemington on Melbourne Cup day for the Listed Cup Day Plate (1800m) but we’re now weighing up whether we should have a throw at the stumps in the Mackinnon Stakes,” he said.

“He came to us with some pretty decent form in Europe and was only beaten four lengths by Novellist, who was favourite for the Arc until he got scratched.

“We’ll just go to Melbourne and see what happens. See what the field is going to be like (in the Mackinnon Stakes) and make a decision from there.

“He’s done plenty of work since he arrived and came through yesterday’s run really well so we’ll just take things day by day and see where that takes us.”

Meanwhile, Lees has one confirmed runner for Derby day with his classy mare Sharnee Rose to head to the Group I Myer Classic (1600m) after she recorded back-to-back stakes wins in the Group III Angst Stakes over the mile to give her trainer a Randwick double on Saturday.

“She is a mare in-form and when a mare is in form they are hard to hold out,” he said.

“She has come back in very good form, and racing consistently.

“We had some reservations about her at the mile but she ran it out strong so we’ll give her, her chance now in a Group I, in the Myer Classic.”