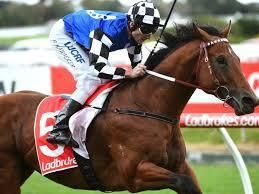 Brad Rawiller is the latest jockey to give Raw Impulse an endorsement for the spring after riding the import to a convincing win at Caulfield.

First it was Hugh Bowman who predicted a bright future for Raw Impulse after a Moonee Valley win at the horse’s Australian debut.

And with Rawiller taking over on Saturday, Raw Impulse took another step towards better races as he rounded up his rivals to sprint to a 3-1/4 length win in the Selangor Turf Club Handicap (1800m).

“I’d bet my life on it that he’s stakes class,” Rawiller said.

“I don’t think that’s any worry. Hopefully he can just keep stepping up and there’ll be a nice race for him in the spring.

The TAB has Raw Impulse equal favourite at $15 in its early Caulfield Cup market along with Victoria Derby and Rosehill Guineas winner winner Tarzino.

Raw Impulse was bought by Australian Bloodstock after racing five times in the UK, and now the horse’s group of owners includes Australian cricketer David Warner.

Jamie Lovett from Australian Bloodstock said it was only an off-season race on Saturday, but they’ve always had an opinion of Raw Impulse.

“If he’s good enough in the spring he’ll certainly get his chance,” Lovett said.

Lovett said they would talk to trainer Darren Weir about immediate plans for the four-year-old. The Warrnambool Cup is one option.

The $1.65 favourite, Raw Impulse defeated fellow import Bantry Bay ($13), who was having his first Australian start for prominent owner Lloyd Williams, with Kapset ($15) another length away third.