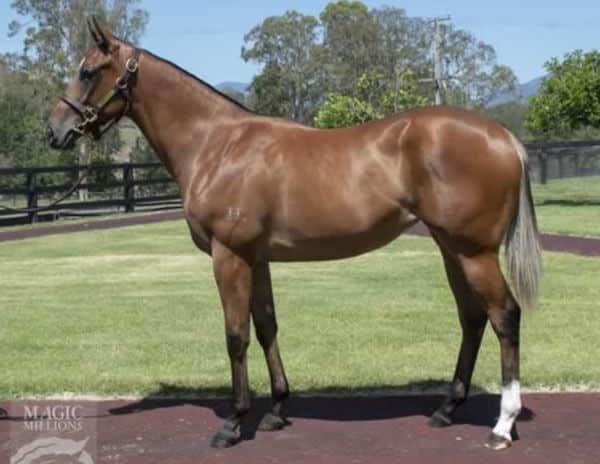 The powerful Kris Lees stable includes some well-bred two year-olds, one of which was an eye-catching winner at the Newcastle trials on Monday morning, while at the same set of trials two royally bred older horses from the same stable indicated they were also ready for race day.

Sporting the Australian Bloodstock colours, two year-old Redoute’s Choice filly Redoute’s Image improved from a debut third at her first trial last month to lead all the way and score a soft two and three-quarter length win in her 800 metre heat.

A $320,000 Magic Millions purchase for Australian Bloodstock/Ronald Rauscher from the Element Hill draft, Redoute’s Image is the second foal of Tracy’s Image, a winning half-sister by Encosta de Lago to Australian Horse of the Year Typhoon Tracy, stakes-winner Red Element and Group I placed Kylie Kwong, the grand-dam of this season’s Group III winning three year-old Alligator Blood, who went ever so close to winning the Caulfield Guineas.’

It’s a huge Black Type family and if Redoute’s Image can jag some Black Type in her racing career, she is going to be a very valuable commodity.

Placed at his only four previous trials, but yet to appear on race day, three year-old Medaglia D’Oro (USA) colt Geo is the fifth foal from Kris Lees former champion race filly Samantha Miss, who was bought by John Singleton at the conclusion of her racing career for $3,850,000 at the Inglis Broodmare Sale back in 2009.

Samantha Miss has had four foals to race and all are winners with the best so far being Frankel filly Miss Fabulass, who won the Group II ATC Tea Rose Stakes and was also trained by Lees for Singleton.

Geo was retained to race and given a good send along this morning, opening up to win his 1000 metre heat by seven lengths and clocking his last 600 metres in 33.41 seconds. He looks ready to go to the races.

This story originated at breednet.com.au