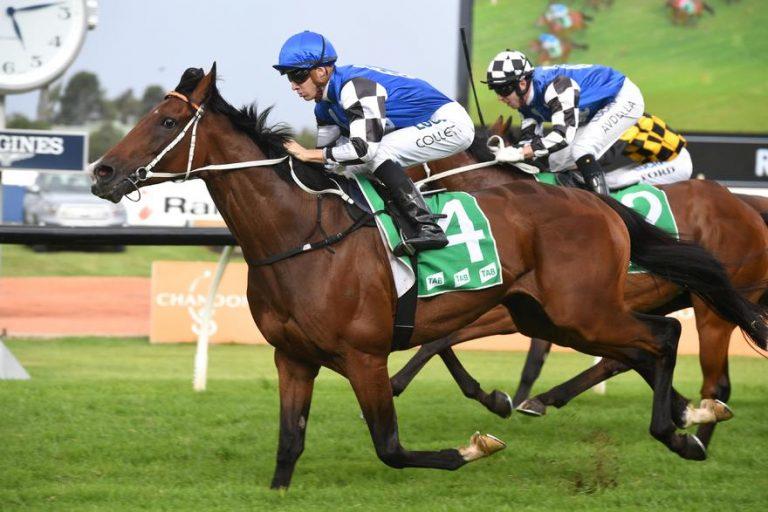 Rise Up Red Cardinal, Group 1 victory awaits in the Kia Tancred Stakes of 2400m on Stakes Day at Rosehill Gardens, the final day of the Longines Golden Slipper Carnival. Your ultimate aim is the $2m Schweppes Sydney Cup of 3200m on Day 2 of The Championships.

Red Cardinal followed up with victory in the Sky High Stakes of 2000m at Rosehill Gardens when ridden by Kerrin McEvoy, and now goes into the Schweppes Sydney Cup at Royal Randwick on 13 April weighted on 53kg and equal 9th in the order-of-entry.

Prepared by Andreas Wolmer in Germany, who also trained Protectionist to win the 2014 Melbourne Cup for Australian Bloodstock, Red Cardinal won the Oleander-Rennen at Hoppergarten, the Belmont Gold Cup at Belmont Park NY, finished second in the Preis Von Europa and fifth in the Prix Kergorlay.

Bred in Ireland by Lynch Bages Ltd, Red Cardinal is a full-brother to the Gr2 winning and Prix Royal-Oak placed Maria Royal, being from the unraced Zafonic mare Notable. In turn, Notable is a half-sister to Orford Ness, the Gr3 winning dam of four stakes horses including the Geelong Cup second Verdant.

A son of the Champion European 3YO Colt of 1999 in Montjeu, who in Australia is the sire of Melbourne Cup winner Green Moon, the Australian Derby winners Nom Du Jeu and Roman Emperor and Wall Street, the NZ Middle Distance Champion.

However, Saturday’s NE Manion Cup results now show that Australian Bloodstock can now have a four-pronged attack on the Sydney Cup. Although victory went to the Liam Howley trained Midterm, it was Australian Bloodstock’s 2017 race winner Big Duke who ran a highly credible second placing.

In addition to the NE Manion Cup, Big Duke has won seven races up to 2600m including the ATC St Leger Stakes, Chairman’s Handicap and Launceston Cup, plus placings in the Sydney Cup and The Metropolitan, and fourth in Rekindling’s 2017 Melbourne Cup.

Australian Bloodstock’s $3.70 race favourite Shraaoh, who has won twice over 2800m at Flemington and Goodwood UK was third, with the ever consistent Doukhan coming from last in the Manion Cup, to finish a credible fifth along the inside running.

However, it was Big Duke’s victory in the ATC St Leger Stakes of 2017 that benefited the state of Sydney staying races. “The renewal of that Sydney St Leger, and an encouraging Metropolitan, that gave us the continuity for staying events into the Summer,” said James Ross, the ATC General Manager of Racing, Wagering and International.

“It greatly benefited the Summer Cup and through to Australia Day, with the black type staying programme continuing to be in-hand,” James said. “We are working in continuing to provide these opportunities for stayers going into winter, and you will see this with the Stayers Cup.”

In addition, Friday Night Racing as another success story under James Ross’s umbrella “The Kia Friday Night Racing, including the Kia Sprint Series, has been a shining light in the ATC new race initiatives, with record crowds exceeding 7,000 racegoers. The emphasis on owner participation is important.”

“Continuity for racegoers in knowing that Friday Night Racing was regularly being conducted at Canterbury Park throughout the summer is important. We are opening up racing to a new audience, attracting families for a friendly and entertaining environment.”

In Kiamichi giving Godolphin a 1-2-3 finish in winning the Golden Slipper Stakes, The Autumn Sun making it five Group wins with the Rosehill Guineas, but it was Winx with her record 32nd consecutive race win and fourth consecutive George Ryder Stakes that made for a great days racing.

“Our racing Carnivals have been greatly benefited by Winx,” stated James Ross, with the great mare being the odds-on $1.10 favourite for the $4m Longines Queen Elizabeth Stakes on 13 April.