Rose To Bloom In Myer 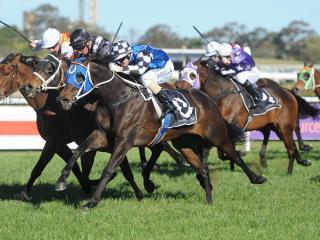 Kris Lees is hoping to make the most of a slight distance query on the favourite Red Tracer when Sharnee Rose lines up in Saturday’s $500,000 Group 1 Myer Classic (1600m) at Flemington.

Formerly trained at Flemington by Matthew Ellerton and Simon Zahra, Sharnee Rose was purchased by her new owners Australian Bloodstock as a four-year-old mare in April this year and transferred to Lees.

Showing good form for her new stable in a couple of sprint races over the Brisbane Winter Carnival, the daughter of Nadeem has gone to the next level in her second preparation for the Newcastle-based horseman.

After scoring an upset victory at $51 over star mare Red Tracer in the Group 3 Golden Pendant (1400m) at Rosehill, she proved it was no fluke by backing it up with a win over subsequent dominant Moonee Valley winner Queenstown in the Group 3 Angst Stakes (1600m) at Randwick.

Asked if he was buoyed by the fact that Red Tracer was yet to win at four attempts at 1600 metres, Lees said that’s what he was relying on.

“I’m confident that Sharnee Rose will run very well but I’ve got a huge respect for Red Tracer,” Lees said.

“The way she won the other day I think she’ll be hard to beat but I’m very pleased with our mare.

“She’s come through her last run really well and she handled the step up the mile which was our only concern.”

Third behind star fillies Atlantic Jewel and Mosheen in the 2011 Group 1 Thousand Guineas (1600m) as a three-year-old, Lees said he doesn’t think he has improved Sharnee Rose but has instead got her back to that three-year-old form.

Drawn perfectly in barrier five for jockey Brenton Avdulla, Lees said the five-year-old worked impressively at Caulfield this morning with her versatility potentially one of her biggest assets come Saturday.

“On paper there doesn’t appear to be a great deal of speed at this stage so it will come down to the pace in the race as to where she settles in the run, she’s quite adaptable,” he said.

“She galloped on her own this morning and she pleased me in her work. She’s pretty fit and she’s in good order.”

Sharnee Rose was rated a $9 chance in pre-post betting, with Red Tracer the $2.25 favourite on the back of her impressive last-start Tristarc Stakes triumph