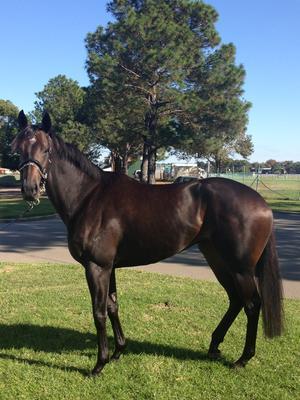 Thankfully, Sharnee Rose is no longer winless – but Lees is aiming to build on her already solid record and thus further boost her stud value.
A four-year-old, Sharnee Rose was purchased by Australian Bloodstock – wonderful supporters of Lees Racing – and arrived in Newcastle earlier this week. She has already been fully syndicated and connections are eyeing possible targets such as the Dark Jewel Classic at next month’s Scone carnival and the Brisbane winter carnival.
“Sharnee Rose is settling in well and I’m thrilled to be training her,” Lees said today.
“She has been a very consistent though unlucky mare and obviously our objective will be to achieve black type success with her.
“The 1400m of the Dark Jewel at Scone may come a bit quick, but there are some nice fillies and mares’ races in Brisbane.”
Sharnee Rose (Nadeem from Jeune mare Farasha) was bred at Yarraman Park Stud at Scone and has raced 17 times so far for two wins and nine placings. In fact, she was placed at her first six starts – and chased home some outstanding horses.
Sharnee Rose on debut was runner-up to Mosheen in a 2YO Handicap (1000m) at Caulfield in March, 2011.

After resuming her career as a three-year-old when runner-up to subsequent Flemington spring carnival winner Unpretentious in a Sale Handicap (1100m), she had the misfortune to bump into the brilliant Atlantic Jewel at her next three appearances – being placed each time, including a third in the Group 1 Thousand Guineas (1600m) at Caulfield.

Sharnee Rose also finished fourth to Invest in the Group 1 SA Oaks (2000m) at Morphettville in April last year.
The mare has raced twice this preparation, and scored first-up over 1100m at Caulfield last month. Australian Bloodstock principal Jamie Lovett said they had been looking to acquire Sharnee Rose for some time.
“We believe we have been able to purchase her at the right time,” Lovett said. “She has great potential both on the racetrack and at stud.

“Kris has a great record developing mares on the track into excellent breeding propositions.”