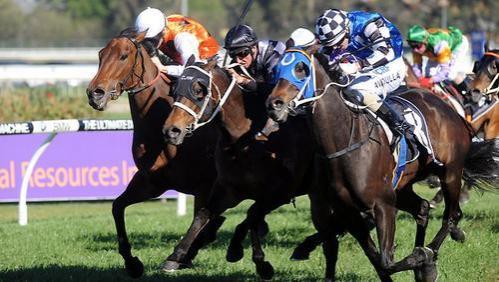 Sharnee Rose was not among original nominations for the 1400m race but when trainer Kris Lees saw the entries he added her to the mix.

“I thought the noms were a bit skinny. I thought (the John Thompson-trained) Peron and a few others would have been there,” Lees said.

“We’ve been desperate to win a Group race with her. They paid a bit of money for her.”

Sharnee Rose was Group One-placed in the 2011 Thousand Guineas when trained in Victoria but she has struggled to win throughout her career.

She came to Lees’ stable in May and Saturday’s victory was just her third in 23 starts and her first at stakes level.

At $51 the five-year-old was an outsider in the Golden Pendant field but Lees rated her chances much better than those odds suggested.

“Her two runs back, we’ve been very happy with them. She ran into a track record time first-up and then at Newcastle she was on the inside where you didn’t want to be,” Lees said.

“We went to the races thinking we had a genuine each-way chance and it’s good to get a win with her.”

Sharnee Rose settled among the backmarkers and came down the outside to deny favourite Red Tracer by a head.

Red Tracer was brave in defeat after being posted wide in the run.

Bennetta ($5.50) was another head away third and her trainer Grahame Begg will now mull over whether to step her up in trip or freshen her for a sprint race during the Melbourne spring carnival.