Slow Pace adds the Wyong Cup to the trophy cabinet ! 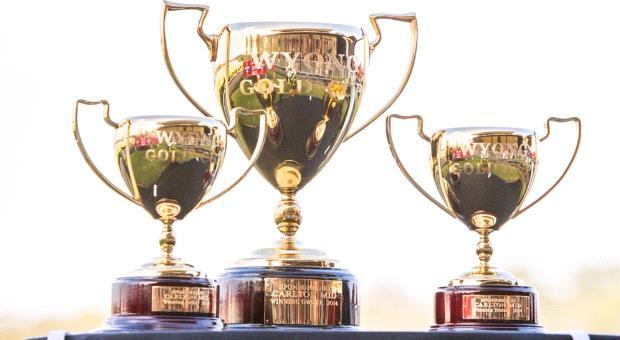 A nine year old imported galloper that had not won for three years and a jockey who had been trying to win the race for 40 years combined for a something of a boilover in today’s Listed Carlton Mid Wyong Gold cup (2100m).

The Kris Lees trained Slow Pace ($18) ridden by Robert Thompson, simply outstayed the opposition on a heavy track in drizzling rain but in front if a very big crowd that had Wyong Race Club officials ecstatic.

“This is an amazing crowd considering the rain was quite heavy this morning and at one stage we wondered if we would even get through the program,” CEO, David Jewell, said.

“It shows that Central Coast people love their sport, love their racing and love an opportunity to get out and socialise.

“The track held up remarkably well and is a credit to our track manager, Chris Allen and his staff.

“We got very good comments from the jockeys about the surface and the way it stood up.”

Slow Pace was one of two runners that Lees had in the race and the lesser performed of his two.

Slow Pace, raced by Australian Bloodstock, had not won since scoring in a Group Three in France in June 2013.

It was soon after that Australian Bloodstock brought him to Australia and gave him to Lees to train.

However he was often forced to carry big weights and Thompson said the 54kgs he carried in the cup may have been the key to his win.

“He relished being on the minimum weight,” Thompson said.

Despite being Australia’s most winning jockey and despite wins in feature races throughout the country Thompson had never won the Wyong cup before.

A mid race move by Thompson might have been another key to the win.

He had Slow Pace racing in fourth position with Halfway To Heaven (Kathy O’Hara) setting the pace.

At the 1100 metres Thompson made his move, sliding up to sit Slow Pace just outside the leader.

Slow Pace went to the lead after turning for home and refused to give in, beating the favourite Sacred Master (Hugh Bowman) by half a length.

It was a mighty effort from Thompson having his first ride since a nasty fall in the mounting yard at Cessnock 11 days earlier.

Lees admitted that at one stage he had considered retiring Slow Pace.

“He has had a lot of joint issues but we decided to keep him going and Robert rode him in the Taree cup when he finished eighth,” Lees said.

“He came back and said the horse would win the Port Macquarie cup so this win is a bit of a surprise.

“This horse will go to the Newcastle cup and you never know he might go to the Port Macquarie cup after that.

“It is three weeks later which is ideal.”

The locally trained Get On The Grange, trained by Allan Kehoe and ridden by Jay Ford, ran a mighty race for third.

He was in third and fourth place on the fence to the turn and momentarily looked a winning chance until over hauled late.