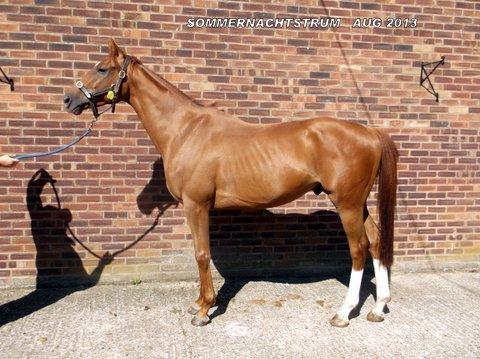 ~~HIS name might be a real tongue-twister – but get used to it.

That’s because trainer Kris Lees reckons his new import Sommernachtstraum has what it takes to make his mark.
The older half-brother to Lees’ latest star, Salon Soldier, sported silk for the first time in Australia at yesterday’s Gosford barrier trials.
And his trainer liked what he saw, admitting today he was “pleasantly surprised”.
Sommernachtstraum finished only fifth behind Howdiddydoit in a 1000m Open trial, but did enough to convince Lees of his potential value to the stable.
“Considering he is a stayer, I really wasn’t expecting him to do anything at all in the trial,” Lees said.
“But I was surprised with the bit of turn of foot he showed on straightening.”
Sommernachtstraum was beaten just over four lengths in the trial, and Lees reckons he is about a month away from making his racing debut in his adopted country.
“I’ll see how he progresses as to whether I feel he needs another trial,” he said.
“We’ll look at probably kicking him off around the 1400m-1600m mark.”
Lees says there are no similarities whatsoever between his newcomer and Salon Soldier, who is unbeaten at Randwick and Flemington from his only two Australian starts.
“At this stage, I doubt he has as much ability as Salon Soldier, but I’ve got no doubt he’ll be winning races here,” he said.
Sommernachtstraum (by Shirocco) and Salon Soldier (by Soldier Hollow) are both German-bred out of the Bluebird mare Salonblue.
Sommernachtstraum is a chestnut, whereas his younger half-brother is a bay.
At his last start, Sommernachtstraum won over 3000m at Chantilly in France on June 30.
Earlier in his career, he finished second to Waldpark – also now raced by Australian Bloodstock and prepared in Melbourne – in the Derby Trial (2212m) at Baden Baden (Germany) in June last year.
Meanwhile, Salon Soldier is having a well-earned break at Lees’
Ellalong Farm in the Hunter Valley following his 1800m success in the Listed Visit Victoria Plate at Flemington on Melbourne Cup day (November 5).
Lees will inspect him tomorrow and then determine when to put him back into work with a view to the autumn riches.