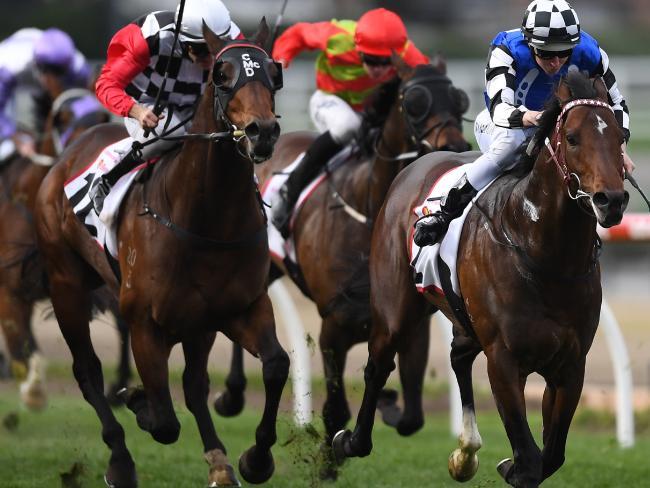 THE nation’s most successful stable and an ownership group that are both synonymous with Melbourne Cup glory are combining forces to try and win the world’s richest turf race, the inaugural $10 million The TAB Everest (1200m) at Royal Randwick on Saturday.

Darren Weir, who established a Commonwealth record when he trained a staggering 449 winners last season, has former Japanese sprinter Brave Smash racing for the Australian Bloodstock syndicate in the rich Randwick sprint.

6 but he merits respect because of the proven big-race records of his connections.

Weir prepared $101 chance Prince Of Penzance to a famous Melbourne Cup win in 2015, and the Australia Bloodstock’s Jamie Lovett and Luke Murrell won the Flemington two-miler with German stayer Protectionist a year earlier.

The trainer and ownership group have Big Duke among others being aimed at the Melbourne Cup on the first Tuesday in November.

But Lovett revealed that Brave Smash was purchased primarily for his sprinting ability and with an assault on The Everest in mind.

Brave Smash won the Listed Royal Cup and contested the Japanese Derby where he clearly didn’t stay and ran last — but Lovett and Murrell saw the potential in the horse.

“When we initially identified Brave Smash in Japan, to our mind we felt they were running him in the wrong races,’’ Lovett said.

“On the times he had run in some of his races, we were of the belief he was a 1200m or 1400m horse.“We had a few guys to race the horse and we said to them don’t look at Brave Smash as a typical Japanese stayer, look at him as a sprinter.’’Lovett sealed the deal to secure Brave Smash just as details of The Everest were unveiled back in February.

“It was ironic because about the time we bought the horse The Everest was being announced,’’ Lovett said.

“I can remember telling the syndicate this might be a stretch but if he brings the times he was running in Japan to Australia, he would be competitive in Group 1 sprints and maybe even The Everest.

“Well, that was the sales pitch but here we are a few months later and we are in The Everest.’’

Lovett said the decision to send Brave Smash to be trained out of Victoria by Weir was a no-brainer.“A couple of Darren’s Melbourne clients were keen to get involved with Brave Smash,’’ Lovett said. “We have had a bit of luck with ‘Weiry’ with horses like Big Duke and a few of his clients said if we found the right horse they were keen to get on board.’’From three Australian starts, Brave Smash has won a Listed race and finished second twice — but Lovett believes the five-year-old has only shown a glimpse of his talent.

“In his three runs for us, he hasn’t been putting the fields away. When we rode him upside down to get a ‘kill’ at Moonee Valley he got there easily and then just floated. It was the same last start.

“But the blinkers are the ace up our sleeve. ‘Weiry’ has always said he was a blinker horse and he will wear them in The Everest. We need him attacking the line so hopefully the blinkers help him.’’

The final piece of the jigsaw was to lock in a jockey and English-based Jamie Spencer will travel to Sydney to ride Brave Smash next Saturday.

Lovett said Spencer has been riding Australian Bloodstock’s Melbourne Cup hopeful, German stayer Red Cardinal in some of his European races this year and feels the decision to book him for Brave Smash is the correct one.

“There has always been a relationship with Jamie, he is an outstanding rider, and it made sense to bring him here,’’ Lovett said.

“You need someone to be a bit of an ambassador overseas about The Everest and Jamie can go back to England and hopefully spread the word about his race.’’