Spring of Success for Australian Bloodstock 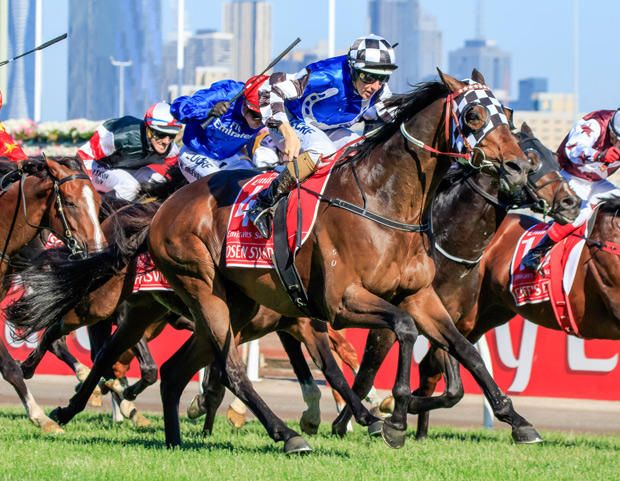 Sourcing premium racehorses from all over the world, Luke Murrell and Jamie Lovett of Australian Bloodstock can sit back at the end of the spring carnival and reflect on a stellar couple of months that brought magic moments and financial reward to their many happy owners.

Europe and in particular Germany have proven fruitful sources of stakes horses for Australian Bloodstock in past years, but a foray into the Japanese market has paid handsome dividends.

Japan proved a very happy hunting ground with two of the standout performers for Australian Bloodstock in 2017 being Tosen Stardom (Jpn) and Brave Smash (Jpn).

Seven year-old Deep Impact stallion Tosen Stardom caught the eye of Australian Bloodstock when finishing second for his Japanese trainer in the Group I ATC Ranvet Stakes in 2015 and then fifth in the Group I ATC Queen Elizabeth Stakes to Criterion.

He was subsequently secured for Australian Bloodstock last year and joined the stable of Darren Weir, placing in two of his first three starts here before spelling in preparation for the spring.

Patience paid dividends with Tosen Stardom winning the Group I MRC Toorak Handicap before adding the $2million Group I VRC Emirates Stakes to his resume at Flemington.

Tosen Stardom endured a chequered passage but showed his true class when racing away to score a dominant length and a half win in the 2000 metre weight-for-age feature.

“It was amazing, that’s the real Tosen Stardom,” said Darren Weir in his post-race remarks.

“The blinkers switched him on. It’s great for a horse with a great pedigree to win on the big stage.”

Tosen Stardom’s Japanese owners retained a share in his ownership and along with all his new Australian owners enjoyed a lucrative victory that saw the stallion pick up $1.2 million for that race alone.

Five year-old Brave Smash showed glimmers of real brilliance in his first Australian campaign suggesting much more is to come from the son of Tosen Phantom, a grand-son of the mighty Sunday Silence.

Placed in each of his four starts over sprint trips, Brave Smash won a Listed race at Moonee Valley and was a closing third to Redzel in the inaugural $10million The Everest.

Australian Bloodstock have long targeted the Melbourne Cup as Australia’s richest race and have tasted success with Protectionist in 2014, so when the $10 million The Everest was announced earlier this year the search was on to find a horse capable of winning and as it happened one had just appeared on the horizon.

Brave Smash won the Listed Royal Cup in Japan over 1600 metres and contested the Japanese Derby (2400m) where he clearly didn’t stay and ran last — but Lovett and Murrell saw potential in the horse.

“When we initially identified Brave Smash in Japan, to our mind we felt they were running him in the wrong races,’’ Lovett told Ray Thomas of the Daily Telegraph.

“We had a few guys to race the horse and we said to them don’t look at Brave Smash as a typical Japanese stayer, look at him as a sprinter.’’

Not long after the deal was sealed, The Everest was announced with the ATC ultimately awarding their slot in the race to Brave Smash, who covered himself in glory with a sensational third place finish netting $800,000 in prizemoney.

It’s fairly safe to say, the best has yet to be seen of Brave Smash!

Classy stayer Big Duke (IRE) has improved with every preparation and also enjoyed big race success this spring winning the $500,000 St Leger at Randwick after finishing second in the Group I ATC The Metropolitan.

A relatively lightly raced six year-old with just 21 starts, Big Duke is still on the up and has already won over $1.4 million in prizemoney, not bad for a horse that arrived in Australia having won only one of four starts in a restricted race in the UK.

Pinpointing a talented horse and then maximizing its potential is what Australian Bloodstock does best with a legion of satisfied owners now sharing in their success.