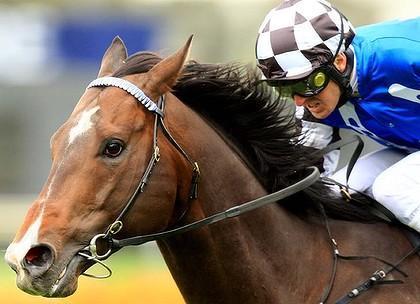 RESULTS suggest that Luke Murrell and Jamie Lovett, Newcastle based founders and directors of the dynamic thoroughbred investment and marketing company Australian Bloodstock, are among the best judges in racing and breeding, not only of local horses but also tried European performers.

A show window for their overseas selection is likely to be next spring’s Melbourne Cup, one in which they could have two or three imported runners, including the German horses Lucas Cranach (third last year’s Cup) and Mawingo (two Australian starts for a win a win at Flemington last month and a third in the Hollindale at the Gold Coast on Saturday).
Australian Bloodstock have also done very well with their local selections with the latest to reward at top level being the powerfully bred, fleet-footed Redoute’s Choice stallion Master of Design, one who came with strong finish last month to swamp brilliant front-running Rain Affair (11 wins from14 starts) in taking the million dollar Group1 Darley T.J. Smith Stakes at Randwick in smart 1200m time of 1:08.83 compared to the track best of 1:8.32. Only Black Caviar (1:08.71) has won the T.J. Smith, a race whose other winners have included Takeover Target and Apache Cat, in faster time
The T.J. Smith success took the career record of Master of Design, a stallion now retired to stand at Adam Sangster’s burgeoning Swettenham stud at Nagambie in Victoria, to 17 starts, seven wins, five other placings and $938,209.The money was a big return on the $150,000 that he cost Australian Bloodstock as a tried performer.
Such a splendid physical specimen and so fashionably bred, he was originally purchased out of the Arrowfield stud draft at the 2007 Inglis Easter yearling sale for $2.1million by John Ferguson Bloodstock acting for Sheikh Mohammed’s Darley conglomerate. Ferguson shops for the Sheikh around the world.
Although the T.J. Smith was Master of Design’s first Group1 victory, he had been a close third at this level in the 17 runner Rupert Clarke (1400m) at Caulfield last spring and beaten only two lengths when mid field in February in the Oakleigh Plate. He lost his chance when he threw two shoes when contesting the Newmarket, but a week before his win at Randwick in the T.J. Smith was impressive in finishing strongly for third money in the Group 3 Sebring Stakes (1100m) at the same venue.
Other efforts that showed Master of Design up as a quality sprinter were a front-running win in the Group 2 Sebring Sprint (the Theo Marks) at Rosehill Gardens, another win at this track and successes at Moonee Valley (by 3.2 lengths) and Perth’s Belmont (1.25 lens). His first five starts resulted in three wins, a head second and a third.
Described by his trainer David Payne as a ‘he’s a serious horse,’ Master of Design was retired by Australian Bloodstock after the T.J. Smith and they fielded a number of approaches from studs for his use as a sire, before accepting an offer from Swettenham.
One of the reasons for the choice of Swettenham, Luke Murrell said, was because they were impressed with their exceptional marketing backing. It is a stud which has gone ahead in leaps and bounds since resident owner Adam Sangster acquired this high quality breeding farm after the death of his father, the famous Robert Sangster.
Breeders are finding Swettenham very appealing because of the quality of the management, the sires on offer and remarkable service fee value.The stud will have seven sires available this year, including five successful in Group1 races, locals Master of Design and Dash For Cash and three young imports, leading European sprinters Equiano and Soldier’s Tale and South and North American star Host. The most expensive on service fees are Equiano ($13,000), the only shuttler, and newcomer Master of Design ($12,500).
Besides his racing ability, Master of Design offers tantalising breeding, continuing the awesomely prepotent Danehill male line through his two times champion Australian sire son Redoute’s Choice, the source of the proven sires Stratum, Snitzel, Not a Single Doubt, Al Samer and Bradbury’s Luck, and from Urge to Merge, a Last Tycoon winner out of the celebrated imported Ahonoora broodmare Princess Tracy.
Master of Design is a half-brother to Suntagonal, an Australian bred South African Group1 winner and Urge to Merge is a sister to Tracy’s Element (11 wins, four Group1 sprints, South Africa) and Towkay (Group 3 winner, Group1 sprint third; sire) and half-sister to Danehill Group winners Danasinga (won QTC Stradbroke, second Doncaster, Doomben Cup; sire) and Cullen (dual Group 3 sprint winner, Group1 placed; sire).
Like her mother,Tracy’s Element has become broodmare of distinction, her offspring including the stakes performing Red Ransom siblings Typhoon Tracy (11 wins to 1600m, $2,438,600, six Group1s), Red Element (5 wins, $243,600, four Melbourne wins to 1200m) and Kylikwong (Melbourne winner, second Victoria Oaks, SAJC Australasian Oaks).
On the sire roster at Queensland’s Glenlogan Park and used over books of 135 (2010) and 121 (2011) in his first two seasons, Red Element has very good prospects of becoming another sire of Group1 winners in the immediate family of Master of Design. So far under the first three dams are over twenty stakes winners, among which are five sires of Group1 winners.
On breeding, performance and physical appearance, the Swettenham stud newcomer measures up as a master of design as a sire prospect. He should do well.