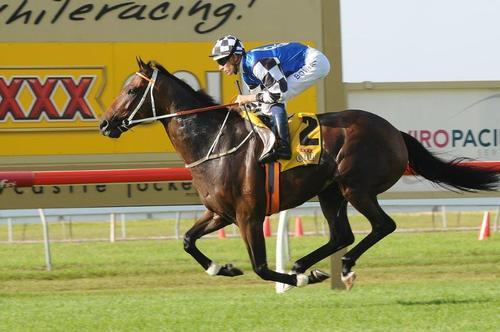 ~~NEWCASTLE: Tuesday, May 13, 2014: TRAINER Kris Lees is chasing a feature interstate double at Doomben on Saturday. And he will rely on the experienced Jim Cassidy to help him achieve that goal.

Lees’ representatives Slow Pace and Hera – both to be ridden by Cassidy – will be floated to the Gold Coast tomorrow night for their weekend assignments.

The Cup will be run under weight-for-age conditions, whilst The Roses is a set weights event (56.5kg) for three-year-old fillies.

Slow Pace hasn’t raced since finishing an excellent third (after racing wide) to Spillway in the Group 3 JRA Plate (2000m) at Randwick on April 26.

It was his third Australian start since joining Lees stable, having finished an eye-catching first-up third in Mecir’s Group 3 Newcastle Newmarket (1400m) on March 19 before beating seven home in Sacred Falls’ Group 1 Doncaster Mile at Randwick on April 12.

Lees purposely has not started him again leading into Saturday’s Cup.

“Three weeks between runs is ideal; he is ready to go,” Lees said today.

However, the trainer adopted a different procedure with Hera, whom he trialled at Cessnock last Friday.

Hera (Paul Hammersley) finished second in an 1150m Open trial, and Lees was pleased with what he saw.

Hera gave at least 3kg to her rivals when she carried 58kg and ran fourth to Estonian Princess in the Group 3 Carr Stakes (1400m) at Randwick on the same day Slow Pace ran in the JRA Plate.

“She raced a bit fresh that day, so she needed the trial to have her ready to step up to a middle distance on Saturday,” Lees explained.

“She has come on well since the trial. I want her to settle on Saturday with the Oaks in mind a fortnight later.”