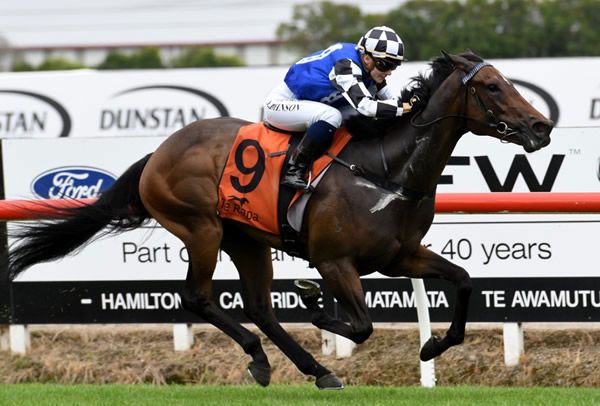 Gifted filly Wolverine is in the mix to cross the Tasman in a bid to gatecrash Fireburn’s party in the final leg of Sydney’s 2-year-old Triple Crown series.

A decision will be made in the coming days whether the Roydon Bergerson-prepared juvenile heads across the Tasman for the Group 1 Moet & Chandon Champagne Stakes (1600m) at Randwick on Saturday week.

If the venture is confirmed, Wolverine will take on star Australian youngster Fireburn, who followed up her dashing Group 1 Golden Slipper Stakes (1200m) victory with another brilliant display to claim the Group 1 ATC Sires’ Produce Stakes (1400m) for trainer Gary Portelli.

“We’re going to see how she does in the next couple of days before we definitely make up our minds. If she does go over, James McDonald is going to ride her,” Bergerson said.

Australian Bloodstock purchased a 50 per cent holding in Wolverine after the daughter of Tivaci had won on debut at Otaki in the spring, with the original owners, which includes Bergerson and respected horseman Chris Rutten, still involved.

Bergerson and Rutten purchased her out of breeder Waikato Stud’s draft at New Zealand Bloodstock’s National Yearling Sale at Karaka for $50,000.

If Wolverine does contest the Champagne Stakes, she is likely to remain in Australia.

“She’ll probably stay over there, but if we don’t take her, she will hopefully race here as a 3-year-old and look at the Karaka Million 3YO Classic [1600m] and see what happens after that,” Bergerson said.

Wolverine won the Group 2 Wakefield Challenge Stakes (1100m) and the Group 2 Eclipse Stakes (1200m) before she finished runner-up in the Karaka Million 2YO (1200m) and was luckless when second in Saturday’s Group 1 Manawatū Sires’ Produce Stakes (1400m).

“It was heart-breaking really; if she didn’t go through the fence at the 800, it might have been a different result,” Bergerson said.

“When I saw the film, I don’t know how she stayed on her feet. She nearly went through the running rail and dropped back a couple of lengths when she was right on Maven Belle’s back.

“John Bary’s horse [Best Seller] was racing erratically and came straight across and took our spot.”

Wolverine was further hampered 75m off the post when winner Maven Belle shifted out, but a protest was dismissed.

Bergerson is understandably desperate to keep Wolverine in his care for as long as possible after losing the services of promising 3-year-olds Nest Egg, who has joined Chris Waller’s stable, and stakes winner Wakari.

“Nest Egg was always going to go to Sydney after the Derby, that was the plan,” he said. “He’s a good horse and was unlucky in the Derby.”

The son of Reliable Man won two of his 13 starts and finished sixth in the Group 1 New Zealand Derby (2400m) before crossing the Tasman. He is raced by Robin Peel-Walker and Mark Wyborn, who have enjoyed a successful association with Waller’s stable.

“Wakari has been retired, he went in the wind. It leaves a big hole in the stable when you lose horses like him and Nest Egg and maybe Wolverine at some stage, they are hard to replace,” Bergerson said.

One bright prospect for the stable is another daughter of Tivaci, recent 2-year-old trial winner Tivaci Princess, who is set to debut later this month.

“She will probably go to Otaki, I think they are going to put on a 2-year-old race. She will have one run and then go for a spell, she’s a nice horse,” Bergerson said.

He bought Tivaci Princess for $100,000 at Karaka where she was offered by Waikato Stud, who remain in the ownership.