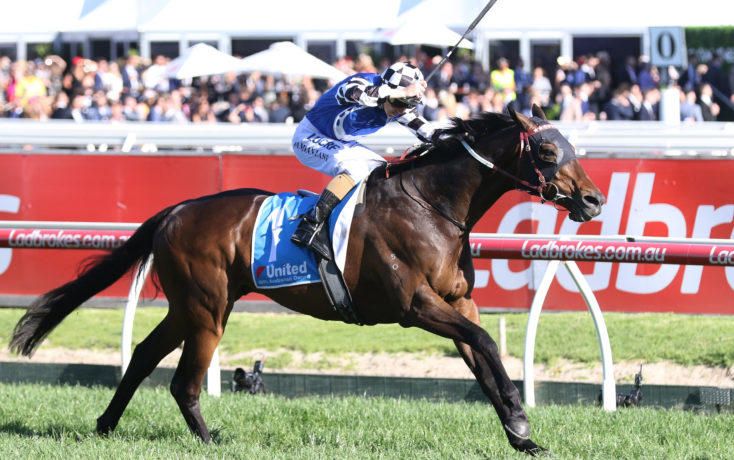 The outstanding performance by topweight Tosen Stardom in Saturday’s $500,000 MRC Toorak H. 1600m G1 has strengthened the case for backing the Deep Impact sire-line in Australia.

Tosen Stardom became Deep Impact’s 31st Group 1 winner when he carried 57.5 kg and the Australian Bloodstock colours to victory after sitting three wide for most of the race, then widest of the field round the turn. Despite that testing run, he finished off with verve to score by a length from Sovereign Nation & Petrology in 1:35.86.

The pioneer was Real Impact who came down under for The Championships in 2015, winning the ATC George Ryder S. G1 and finishing a close second in the Doncaster G1. At the same Sydney Autumn Carnival, Tosen Stardom was second in the Ranvet G1 and fifth in Criterion’s Queen Elizabeth S. G1.

Tosen Stardom, also placed twice in Melbourne Group 1 sprints this year, has won six races and $2.1 million and is likely to go for the$1 million Cantala StakesG1, now known as the Kennedy Mile, on the last day ofCup Week at Flemington.

Deep Impact’s towering dominance in Japan is well-established, but his international record, from around 30 runners outside Japan, is equally imposing. Seven of them are Group 1 winners: Gentildonna (Dubai), A Shin Hikari (France & Hong Kong), Beauty Parlour (France), Real Steel & Vivlos (Dubai), as well as Real Impact and Tosen Stardom.

Deep Impact is well on the way to securing his sixth Japanese Sires’ premiership, with 18 stakeswinners and almost $A53 million prizemoney – about $A13 million more than King Kamehameha. Echoing Snitzel’s category dominance in Australia last season, Deep Impact is also heading the 2YO and 3YO Sires’ tables.

Roulston said afterwards, “I sent three mares to Real Impact in his first year, and when I saw his foals here I really loved them; they’re nice types… I’m quite bullish about Real Impact after seeing his foals.”