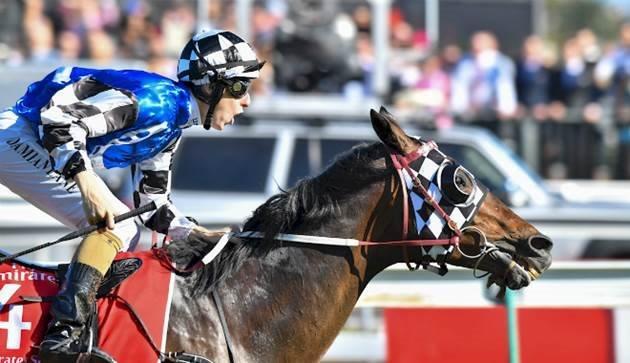 Darren Weir weaved his magic to turn Tosen Stardom around within the space of a week as the Japanese import chalked up a second group 1 for the carnival in a drama-charged Emirates Stakes – on and off the track – at Flemington on Saturday.

They then lost their preferred rider, Hugh Bowman, to suspension, replacing him with two-time group 1 winner Dee, who dismounted the horse swiftly after the freak accident.

The pre-race drama did little to detract from Tosen Stardom, who was ridden patiently and mowed down the frontrunners to win by a widening one-and-a-half lengths from Happy Clapper.

“It was amazing, wasn’t it? That was the real Tosen Stardom,” Weir said. “We’ve seen it at home – the blinkers have gone on at the right time and switched him on.

“Stepping to 2000metres … I guess [for] myself it was a head scratcher last Saturday. But in that race they seemed to jump out, get in their position and stayed there. I said to Jarrod [McLean], ‘I’m keen to back him up’. He said, ‘Well there’s no reason why you wouldn’t’.

“Nothing’s gone right before this spring, to be honest.”

And they would have been thanking their lucky stars after Lane was hampered for a large part of the straight on Raw Impulse earlier in the day, denying Weir and Australian Bloodstock directors Jamie Lovett and Luke Murrell what should have been a raceday double.

“There were a few horses that lost their cool and got a bit fizzy [after Gingernuts’ scratching], but luckily he stayed calm and then he did the rest after that,” Lane said.

“I tell you, he would have been a good thing beat if I didn’t get out. I had one run close on me, it really stopped my momentum and to switch across heels and still win was just massive.”

Webster was thrilled with Happy Clapper’s $360,000 cheque for running second and will spell the Epsom Handicap winner with an eye to the autumn.

And that’s only after lifting his eyes to watch the Emirates Stakes after being called upon to help the ill bystander.

“[Happy Clapper’s jockey] Blake Shinn just said [Brenton] Avdulla [on It’s Somewhat] was let out just before him and if he holds him in he probably wins,” Webster said.

Ben Melham, who rode Johannes Vermeer into second in the Melbourne Cup, was suspended for eight meetings for using the whip 10 times on The Taj Mahal before the 100 metres, five more than allowed.