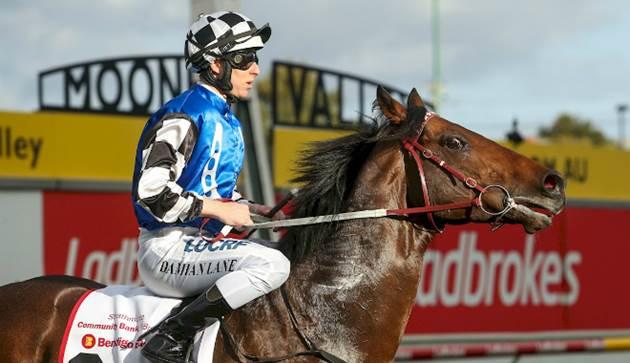 Darren Weir said he will accept with Brave Smash in Saturday’s Listed Testa Rossa Stakes, his desire to run The Everest-bound galloper at Caulfield.

Weir said all things going well with Brave Smash’s Casterton gallop on Tuesday morning, when Damian Lane took the reins once more, the Australian Bloodstock-owned galloper would have his final pre-Everest race at The Heath over 1200m.

“I’m going to accept for sure, and work it out after that,” Weir told RSN 927’s Racing Pulse.

“He’s galloping at Casterton this morning.

“Damian’s gone down to have a ride on him, so we’ll see how he gallops, then accept and work out if he runs there.

“I’m a bit keen to run because he’s a bull, and he’s still a bit big, and it gives us three weeks to The Everest.

“I think fourth-up into The Everest would be terrific, and three-week gap between his third and fourth run sits well with me.”

Weir added he’ll be making a gear change for the $10 million race, too.

“I’m thinking blinkers on in The Everest,” he added.

“I’d been a little keen to ride him quieter, hopefully midfield on Saturday if we run and strong through the line.

“He’s just got the habit of not stepping away great; he’s just been missing it by half-a-length

“Amelie’s Star is going really well, but she’d have to win on Saturday to get in. She’ll run in the Naturalism,” he said.

“Admire Deus gets into quarantine at Werribee on Monday.

“Everything’s going really well with him. We’ve got a couple of staff over in Japan looking after him, and they’re happy with how things are going.

“It’s a huge ask to run in a Caulfield Cup first-up, but they’re telling me the horse is in great shape.

“Ideally I’d have loved to have given him a run before the Caulfield Cup, but the quarantine restrictions just don’t let you do that.”

Weir confirmed Limestone had recovered well from her awkward fall late in the Danehill Stakes on Saturday.

“She’s a bit stiff and sore, but we were able to take her for a trot yesterday,” the Melbourne Cup-winning trainer said.

“She had a canter up the hill this morning. From our point-of-view, there’s nothing structurally wrong, she’s just a little bit muscle sore.

“She’ll be fine, she’ll be able to stretch the legs on the course proper at Ballarat on Saturday morning, and hopefully we’re back on track again.”

Meanwhile, Weir was thrilled with the run of his five-time G1 winner Black Heart Bart, who placed behind Humidor and Hartnell in the Makybe Diva, and all was tracking well for his Underwood Stakes defence.

And Voodoo Lad will be aiming to go one better in this year’s G1 Sir Rupert Clarke Stakes after finishing second to Bon Aurum last year, and coming off a fourth-placing in Saturday’s G2 Bobbie Lewis Quality.

“He just never settled from when the barriers opened, and just over-raced, and when he does that, it takes away his brilliance late in the race,” Weir said of Voodoo Lad’s Bobbie Lewis run.