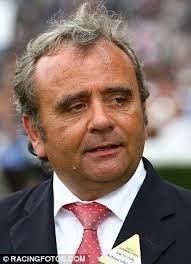 Wohler said his staff accompanying the entire had reported all was well with the son of Monsun, which left him shocked when word of the rumours reached him.

“I was a bit confused myself and I couldn’t believe it because I always got good news so it turned out to be not true,” Wohler said.

Protectionist showed he was ready for the Melbourne Cup with a strong gallop at Werribee on Thursday morning.

“I couldn’t be happier with the horse and he did everything right in his last piece of work this morning,” Wohler said. “We are looking forward to Tuesday.

“I liked his work better than before his last race so he’s come on from that.”

Lucas Cranach, also syndicated by Australian Bloodstock, became the only German-bred horse to run a place in the Melbourne Cup when he finished third to Dunaden in 2011.

Lucas Cranach won the Group II Hansa-Preis (2400m) at Hamburg before travelling to Australia three years ago. Protectionist also won the Hansa-Preis before he claimed the Group I Prix Kergorlay in France.

Wohler said Protectionist was a different style of stayer to Lucas Cranach but the success of the likes of Prix de l’Arc de Triomphe winner Danedream showed German-bred horses could compete anywhere in the world.

“We have always had small breeding stock in Germany but the best horses can always compete around the world and that has been proven in the last decade,” Wohler said.

“Hopefully, he (Protectionist) does it as well.”

Cox Plate-winning jockey Ryan Moore will attempt to add the Melbourne Cup to his record when he rides Protectionist at Flemington.

Admire Rakti’s Caulfield Cup win has him at the top of Bet Easy’s Melbourne Cup market at $5 ahead of Protectionist and Lucia Valentina at $7.